Manchester United travel to Aston Villa for the first Friday night Premier League fixture in more than 11 years, and what could be the only one on this day of the week this season, due to policing.

Both of these sides picked up 1-0 victories on the opening day of the season – Manchester United beat Tottenham Hotspur thanks to a Kyle Walker own goal, whilst Villa secured three points at newly-promoted Bournemouth thanks to new signing Rudy Gestede.

Aston Villa are expected to be battling against relegation once again, but a win on the road and a clean sheet to add are two big positives for Tim Sherwood’s side. The Villans started last season with a 1-0 win away from home and went on to take 10 points and three clean sheets in their opening four matches.

Jores Okore is out with a knee injury and is not going to be back until after the international break in September.

Tim Sherwood has confirmed that Carles Gil is not fit to the feature, though the Spaniard was hardly in his plans last season anyway.

Jack Grealish will miss out with a hamstring injury.

Louis van Gaal has already confirmed David de Gea will not be part of his first-team plans until his transfer speculation is resolved. The Spaniard continues to be linked with a move to Real Madrid, which led to his manager saying last week that his head was not in the right place for him to play.

The United boss confirmed on Thursday that Marcos Rojo and Phil Jones will both miss out on the trip to Villa Park, whilst Marouane Fellaini is suspended. 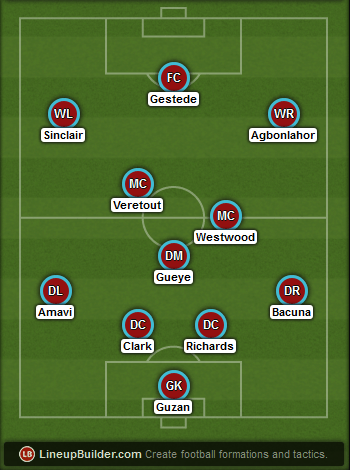 Despite last weekend’s scoreline, Tim Sherwood plays an attacking formation. Rudy Gestede’s goalscoring debut from the substitutes bench could earn his first Premier League start tonight, whilst Jordan Ayew’s unimpressive debut may see him miss out. Micah Richards and Ciaran Clark performed well as the centre-back partnership versus Bournemouth. There’s a couple of new signings in midfield too looking to keep their place in the starting lineup. 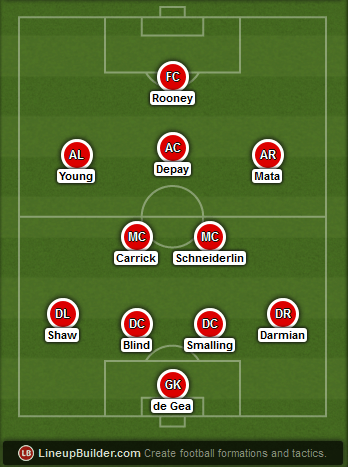 With David de Gea and Marcos Rojo not ready to make their returns and a deal for Pedro not yet agreed, I think it’s going to be the same XI that beat Spurs last weekend. Memphis Depay had a below par debut in the number 10 role but I think he’ll remain there until/if Pedro signs in which the Spaniard can go on the right, Juan Mata in the middle and Depay into his usual left wing role. Wayne Rooney didn’t have a single shot on target at home last weekend but has an excellent record against Aston Villa. The United captain will be hoping for better supply from his teammates. Morgan Schneiderlin was excellent on his debut so I am expecting Bastian Schweinsteiger to remain amongst the substitutes.

Juan Mata vs Jordan Amavi
Jordan Amavi made an impressive debut for Aston Villa, making numerous tackles, interceptions and clearances as well as bringing the ball forward down the wing. The French full-back may need to be a bit careful how far forward he ventures forward in this game as Juan Mata can be deadly in open space. The Spanish playmaker likes to cut in on his stronger foot from the right wing and is United’s number one playmaker. Although they created very little last weekend, you can look for the likes of Mata and co to be heavily involved on Friday.

Wayne Rooney vs Micah Richards
Wayne Rooney’s stunning overhead winner in the Manchester derby back in February 2011 saw the United captain connect with the ball as Micah Richards was setting himself to head Nani’s cross away. These two are set to meet again on Friday but this time Richards is playing for Aston Villa and manager Tim Sherwood had the confidence to play him at centre-back will success last weekend. The former-England international is prone to a few errors and poor position at times and that could certainly go punished with Rooney lurking around. Wayne Rooney didn’t have a single shot on target last weekend so may be looking to take some anger out on a Villa club that he has scored 13 goals in 24 league appearances against previously.

Rudy Gestede vs Chris Smalling
Aston Villa’s new recruit made a big impact with Blackburn Rovers in the Championship last season and started life in the Premier League with a winning header as a substitute last weekend. The striker may get his first starting job this weekend and if so Chris Smalling and Daley Blind will be the duo to keep him quiet. Villa are waiting for Jordan Veretout to settle in for some creativity down the middle, but they do have pace down the wings to try create chances for the striker, as well as working on set pieces as a key goalscoring threat. Smalling put in a man of the match performance in shutting out Harry Kane and Tottenham last weekend, let’s see if the England international can deal with the aerial threat on a Friday night.

19 – Aston Villa are without a win over Manchester United at Villa Park since 1995. They are both ever-present in the Premier League. Failure to win on Friday would extend the run to two decades.

39 – Aston Villa have won only one of their last 39 Premier League games versus Manchester United (D10, L28).

108 – Manchester United have taken more points from Aston Villa than any single team has taken from another in Premier League history.