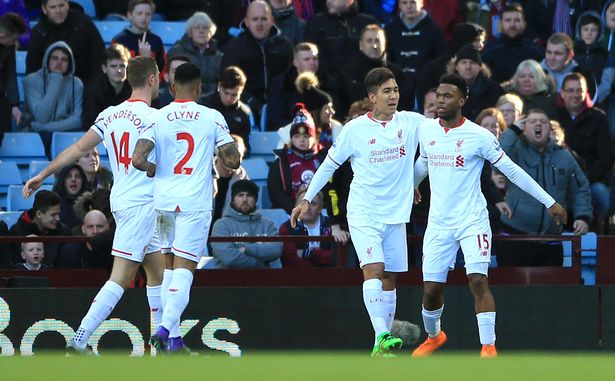 Liverpool thumped 6 goals past a woeful Aston Villa who are now almost destined for relegation.

Villa started off with a lot of energy but allowed Daniel Sturridge acres of space in the area to guide Philippe Coutinho’s cross in from six yards. Minutes later it was 2-0 when James Milner’s free-kick floated above everyone and flew past keeper Mark Bunn who should have done better. Jordan Henderson had the chance to put Liverpool even further ahead but his volley was deflected wide by Jores Okore.

Leandro Bacuna had a chance to get back in the game but fluffed his shot to the displeasure of the Aston Villa supporters. It was Bacuna again who was at fault as the midfielder was robbed by Roberto Firmino who consequently slotted the ball through to Emre Can, the German powered the ball past Bunn to the delight of the traveling Liverpool fans.

It was Origi’s turn next to get on the scoresheet with a precise effort before Nathaniel Clyne added to Villa’s misery, the ex-Southampton right-back bundled the ball into the back of the net after Origi was denied a second goal.

As Liverpool looked to be finished for the day, Kolo Toure added another with a free header from Jordan Henderson’s corner. Scott Sinclair nearly scored a consolation goal but was denied by the woodwork. Aston Villa now seem all but down as this 6-0 thrashing won’t give them much confidence.