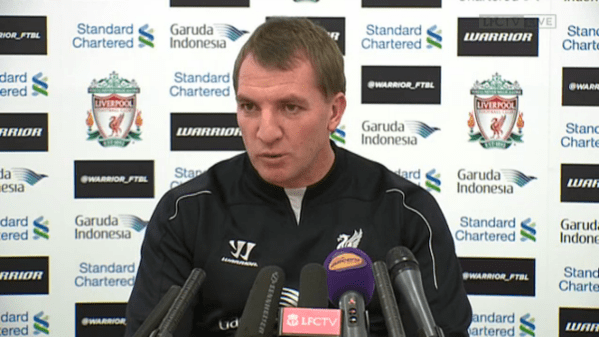 Liverpool will take on Aston Villa in the Premier League on Saturday at the Villa Park, where the Reds will be looking to make five away wins in a row in all competitions. Ahead of the match on Saturday, Brendan Rodgers in his pre-match press conference has discussed about Liverpool’s injury news, transfer speculations and other issues.

Recently, English and Italian media have speculated on the future of Mario Balotelli, the Italian striker who joined in the summer for a reported fee of £16m. The former Inter Milan striker has struggled to find any-sort-of-acceptable form and has yet to score in the Premier League.

There were reports that several Italian clubs like Napoli, Inter Milan and his former club AC Milan could be looking to take him back to Italy, while Turkish giants Olympiakos were also thought to be interested. Rodgers however has dismissed talks of Balotelli going elsewhere in January.

Rodgers jokes that he can agree with Mancini that he should be paid double to manage Balotelli. — This Is Anfield (@thisisanfield) January 15, 2015

Rodgers, however, did mention that there have been discussions to bring back Divock Origi permanently in January, but there is no such interest in Lavezzi or Mat Ryan.

BR asked on Mat Ryan / Lavezzii: Nothing on that, no.

BR admits “there’s been discussions” on bringing Origi to LFC this month. — This Is Anfield (@thisisanfield) January 15, 2015

Rodgers has delivered some positive news on the injury front. Right back Glen Johnson has returned to training and would be available for selection this week. Raheem Sterling, who missed the last match, is also back in the squad, but he has refused to put a date on Sturridge’s return to the side.

Rodgers press conference ongoing. Says Johnson is back training, the club are monitoring Gerrard and Lallana and Sturridge not yet ready.

BR: Joe Allen should be back training with the group in the next couple of days.

The Liverpool manager added that Villa don’t concede too many at home, despite them winning only two matches at Villa Park this season and expects a tough game on Saturday.

Rodgers also spoke about the recent development shown by Emre Can, claiming him as a ‘multifunctional’ player, and has kept high hopes on Dejan Lovren as well.