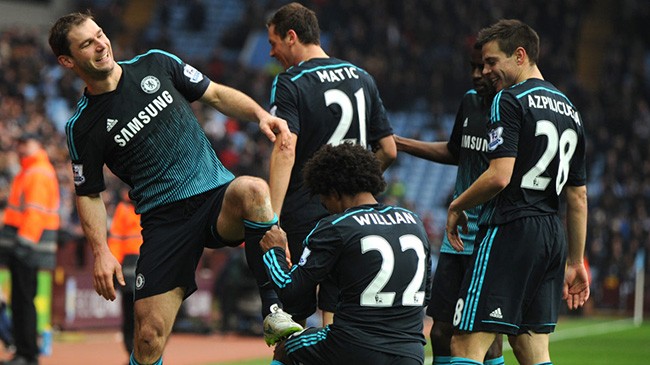 Chelsea took a giant step towards winning the Premier League for the first time in 5 years with a hard-fought 2-1 win away at Aston Villa. At a ground which has never been the happiest of hunting grounds for Jose Mourinho sides, the Blues struck early through Eden Hazard. Jores Okore equalised for the home side with a header early on in the second half, but it was Branislav Ivanovic who the final say with a brilliant left-footed volley which turned out to be the winner.

This win is very significant, especially because Manchester City dropped points again. The defending champions needed a last-minute equaliser from James Milner to save their blushes against lowly Hull City. This result though, means that Chelsea have now extended their lead at the top of the table to seven points, with 14 games left to play.

1) Chelsea prove they can cope without Fabregas and Costa:

Even though they were not at their absolute best, Chelsea were in control for most of the game, and saw it out comfortably in the end. There have been critics who have said that they are not the same without Cesc Fabregas and Diego Costa, which is true. The duo has either scored or assisted a total of 36 goals in the Premier League this season for Chelsea, and their absence thereby leaves an obvious void. But in the end, the league leaders got the job done in a fixture that has been the cause of their downfall in recent seasons. Their response after Villa equalised will in particular please Mourinho. After Ivanovic scored, they hardly looked like conceding, even though Villa had spells of pressure. With Fabregas set to be back for the game against Everton on Thursday, the problem of lack of creativity with Ramires in the midfield will be solved.

2) Another important goal from Ivanovic:

Branislav Ivanovic now has 18 Premier League goals in the last 5 years with Chelsea. That is the same number that Steven Gerrard has, if you take away the Liverpool man’s penalties. The Serbian has a habit of coming up with big goals, and this is his second in the last 10 days. He also got the winner in the Capital One Cup semi-final second leg at Stamford Bridge last week.

3) Villa show signs of fight, but are in big trouble:

Jores Okore’s goal was the first that Villa have scored in 659 minutes of football. The last time they found the back of the net was against Manchester United. This shows that they can do it against the big sides at home, but aren’t able to replicate it against teams around them. Paul Lambert’s men are currently in 16th, just two points off the relegation places. They will want to use this performance against the league leaders as a catalyst to perform in their remaining fixtures. If they go on another goalless run, they will be deep in relegation trouble before they know it.

The Belgian put in another world-class display and was involved in every area of the pitch. His opening goal was a fantastic team goal involving Oscar and Willian, and his movement across Alan Hutton was subtle but precise. He has now scored in each of Chelsea’s last three away games, and has proved that he can step up to the plate when Fabregas and Costa are out. Hazard is already of the world’s best players, and Mourinho has successfully transformed him into a vital cog in Chelsea’s setup.

8 – Eden Hazard has had a hand in eight goals (four goals, four assists) in his last nine Premier League apps for Chelsea. Special.

Even though there is a long way to go before the title race is over, it is very difficult to see Chelsea giving up such a big lead. Considering Manchester City’s current form and the tough run of fixtures coming up for Manuel Pellegrini’s men, Mourinho will know that his side have one hand on the trophy. And considering the Portuguese’s experience at winning leagues in the past, he will make sure Chelsea don’t let up until the hold turns into a vice-grip.