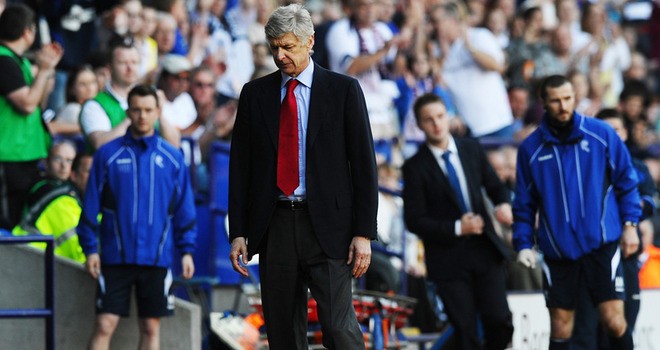 Arsenal were practically knocked out of the title race when they lost 1-2 to Bolton Wanderers on Sunday. The defeat meant that Arsenal are now nine points behind leaders Manchester United and three points behind second placed Chelsea with only four games remaining in the season.

Arsene Wenger was left notably disappointed after a turbulent week in which they could only manage to draw their games with Liverpool and Tottenham, despite being in the lead in both encounters.

And now the defeat to Bolton has ensured that Arsenal, who lost won a trophy in 2005, will spend another year without silverware.

However, Wenger has reiterated that there is no problems with the footballing philosophy at Arsenal. While speaking to Arsenal TV Online, he said:

“If someone can convince me that the principles are wrong I am ready to change, but I feel we try to play football the proper way”

“When you don’t win you question your principles, but you have to give yourself the right distance to see what is right and wrong in what you do.

“I think if something is wrong in our team, it is not the principles in playing our football.

“The team have had an outstanding attitude and will not be rewarded because of small things, but small things cost you.

“It is frustrating because the team has produced the efforts.

“We have to be realistic that it [the title] is very unlikely now, but we have to finish as well as we can.”

However, Arsene Wenger outlined his plans to make important changes to his squad during the transfer window. He said:

“We have the quality, that is for sure. We have to strengthen the squad where it needs and make the right decision on that front. It [transfers] is always in my mind every day”

If the Arsenal boss is planning to make changes to his squad, the addition of some quality and solid defenders must be on his mind.

The Gunners have let leads slip in crucial matches this term which has ultimately dashed their hopes for silverware and brought the winning mentality of the team under question.

Arsene Wenger acknowledged this fact when he said:

“We have not been stable enough defensively.”

“The numbers are the numbers – this week we have conceded six goals and you cannot afford to concede six goals in April in three games and win the championship.”

“Defensively we have been too frail this season.”

Arsenal next play Manchester United at the Emirates Stadium on 1st of May. But a game that was once touted as a potential title decider, is now anything but.