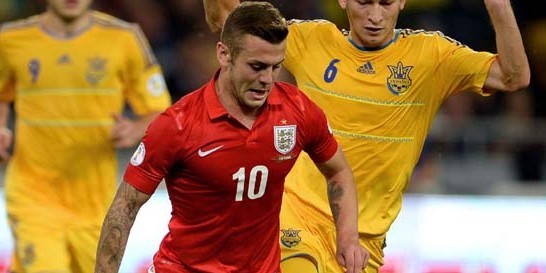 England manager Roy Hodgson says Arsenal midfielder Jack Wilshere is still not fully fit, and that was the major reason for his lacklustre and below-par performance against Ukraine in the World Cup Qualifiers.

Wilshere made his second start in four days, after he played full 90 minutes against Moldova on Friday, but against Ukraine, he didn’t enjoy the best of evenings.

His passing was wayward and he failed to make any significant impact against a strong Ukraine defence, and was replaced by Ashley Young midway through the second-half.

Hodgson feels that Wilshere is still not completely fit as he didn’t enjoy the benefit of a full pre-season campaign. Wilshere missed almost two years of football with ankle and knee problems and hence extra protection was taken for him by Arsenal management.

“Jack is still looking for full fitness,” said Hodgson as quoted by ITV. That is why we took him off in the second-half.

“We certainly saw a much more effective Jack against Moldova, but he still did his work against Ukraine and, tactically, did all the things I asked of him.”

The returning to form of Aaron Ramsey can be a blessing in disguise for the England star. It is obvious that the Mesut Ozil, the new record signing, will be given the attacking midfield role, which means Wilshere will drop deep in the middle.

Once Mikel Arteta gets fit, Wenger will have options in the middle to choose between Ramsey, Tomas Rosicky, Mathieu Flamini and Wilshere, which could mean less game-time for the youngster and in the process, he can develop without being overused and hence keep those injuries away.