Lukas Podolski is the an intriguing piece in the Arsenal puzzle as they fight towards Champions League football next season. 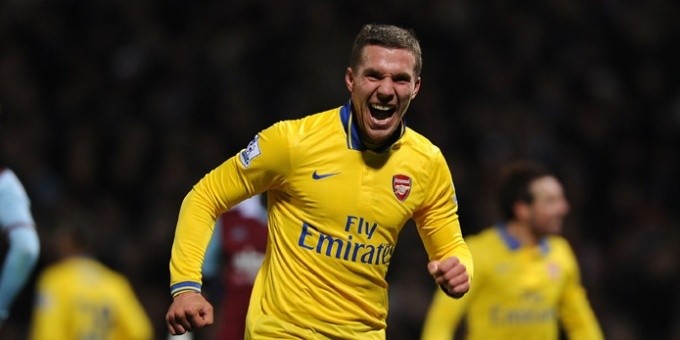 He is concurrently the Gunner’s most potent offensive threat and biggest defensive liability. Although often slated for neglecting his defensive duties (most currently by captain and peripheral figure Thomas Vermaelen), Podolski has a terrific strike rate of 0.65 goals per 90 minutes this season for an Arsenal side that has been struggling offensively of late.

The root of Podolski’s problems is his stamina, or lack thereof. When he starts, he rarely completes the full ninety minutes. In fact his average appearance length has been a measly 52 minutes. His fitness level does not allow him to track back and provide cover for the full backs nor press the opposition defence at anywhere near the required intensity.

Add to this that his relatively lower technical ability does not allow him to be an integral part of Arsenal’s possession based game and it amounts to Podolski being almost completely anonymous in matches that he does not score in. And yet, it bears repeating that he has a strike rate of 0.65 goals per game.

The real question of whether to start Podolski then becomes: “What is the net value of Podolski’s time on the pitch?” The answer is definitely context specific.

This Arsenal team does not create as many chances on goal as its rivals (Arsenal’s total chances created is less than Everton, Liverpool, Manchester City, Chelsea, Spurs, Newcastle and Southampton).

In this context, the plain and simple truth is that Podolski must start for Arsenal in the remaining games of the season, as he remains the only player who looks likely to capitalise on the chances presented to him at an acceptable rate.

Olivier Giroud has lead the line gallantly for the Gunners this season, notching up his 20th goal of the season with a brilliant touch and finish against West Ham, but even his most fervent supporter will admit that he has cast an exhausted and frustrated shadow for the last couple of months.

Whether this can be attributed to the fatigue of playing almost every game this season and the injuries to key players who run beyond him such as Aaron Ramsey and Theo Walcott is not particularly relevant for this debate. As it stands Giroud cannot be relied upon to provide the goals necessary for Arsenal to guarantee a top four finish – but Podolski can.

A player that doesn’t track back but is eager to get forward and on the end of moves is often described as a “luxury” player, and the common wisdom is that a team fighting for something in the league (whether it be the title, top four, or avoiding relegation) cannot afford to carry a player such as this.

But this is exactly what Arsenal must do, not as a matter of team spirit, but as a matter of practicality; you must score goals to win games. Others must step up and cover Podolski’s share of the work as well as their own, and in return, the statistics show he will reward you in goals.