Arsene Wenger has been at the wrong end of criticism this season (so early) for not signing enough quality players, especially in the defence. At times, injuries and suspension have left the defence in bare bones for the Gunners which in someway have had an impact on their season so far. The only positive Arsenal can draw is the form of Alexis Sanchez, the Chilean forward, who joined from Barcelona this summer.

The Gunners skipper Mikel Arteta has praised him heavily while midfielder Flamini has compared his impact with club legend Thierry Henry.

Chilean press are naturally happy with the performance of Sanchez and they are featuring articles on him almost on a daily basis. El Mercurio, Chilean daily newspaper has presented a statistical data and claims that Arsenal’s new ‘boy wonder’ is the best debutant (so far; in terms of stats) the club have had in the last 23 years. Better than Henry, Bergkamp, Van Persie and Overmars! 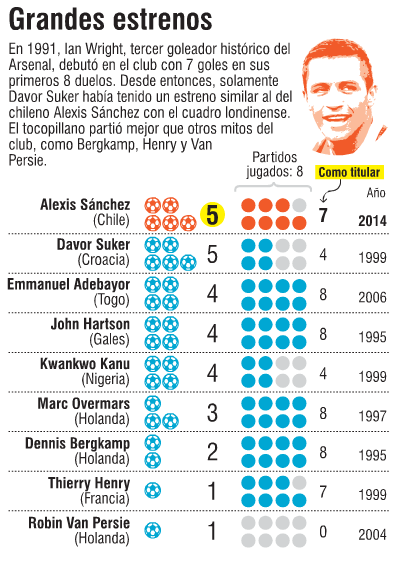 In 1991, club legend Ian Wright, second all time goal scorers at the club, scored 7 goals in his opening eight matches. Sanchez has also scored 8 goals in all competition for the Gunners. He is also a popular figure among the Arsenal fans with 36.4% of his shirts have been sold by the club.

Well, Sanchez has been firing all cylinders no doubt but he needs help from his team-mates, as most of them have been under performing this season.