A London derby on Saturday sees Arsenal play host to West Ham at the Emirates.

The Gunners are the form team of these two having won six straight domestically including the FA Cup. West Ham have been in decline since sitting in fourth position on Christmas Day – just one win in their last 11 Premier League games as the pressure grows on Sam Allardyce.

Arsenal travel to Monaco on Tuesday needing to score at least three goals if they’re to avoid being eliminated at the second round of the UEFA Champions League for the fifth consecutive season.

Gabriel Paulista is confirmed absent with a hamstring injury but could return next weekend. Mathieu Debuchy is the only other defender missing from Arsène Wenger’s squad this weekend.

Midfielders Jack Wilshere, Mikel Arteta and Abou Diaby are all unavailable to the manager. Alex Oxlade-Chamberlain will be a late fitness test to see if he’s available but with Theo Walcott and Danny Welbeck available down the right wing, we wouldn’t expect the England international to start this weekend.

Mathieu Flamini could make his return, whilst Tomáš Rosický is a slight doubt.

Winston Reid and James Tomkins are out injured, whilst Carl Jenkinson is ineligible to face his parent club leaving West Ham without three of their regular back four.

All midfielders are available to Sam Allardyce which could see Alex Song face his former club.

A toe injury could rule Enner Valencia out which would leave Diafra Sakho as the only available senior striker in the West Ham squad. Andy Carroll and Carlton Cole are both sidelined. 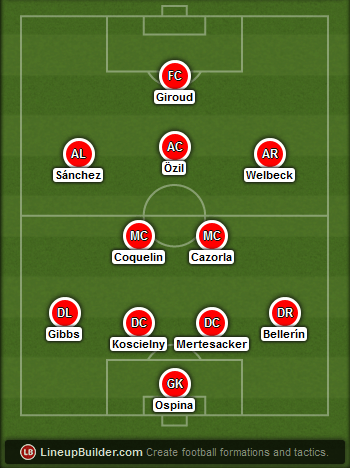 We can see Arsène Wenger saving Nacho Monreal for the Champions League giving Kieran Gibbs the start at left-back this weekend. Santi Cazorla has played well in his deeper role, dictating the pace. With West Ham expected to pack their midfield the Spaniard’s precision passing will be a useful tool. Danny Welbeck scored the FA Cup winner as a striker but could go back out on the right wing this weekend with Olivier Giroud to return to the starting lineup. 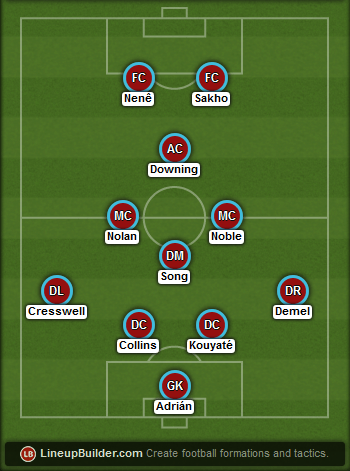 With Winston Reid and James Tomkins out injured, Cheikhou Kouyaté should drop back to partner James Collins in the centre of the West Ham defence.  The Senegalese player put in a man of the match performance in that role versus Manchester United not so long ago.  Guy Demel should make his fourth Premier League start of the season at right-back.  Three men in midfield will try to limit Mesut Özil and Santi Cazorla’s creativity in the centre.  Nenê should make his first Premier League start due to the injuries in attack for West Ham.

Alexis Sánchez vs Guy Demel
33-year old Guy Demel has only started three Premier League games this season with Carl Jenkinson the usual starter. Alexis Sánchez should really test the Ivorian should he start. Demel does like to bomb forward so don’t be surprised if the Chilean receives the ball with open space to run into at times in this game. He’s had a quiet month or so but should West Ham pack the midfield the Gunners will be forced to look down the wings to create opportunities and Alexis Sánchez is perfect for just that.

Danny Welbeck vs Aaron Cresswell
On the opposite flank Arsenal could have either Danny Welbeck or Theo Walcott to run at Aaron Cresswell. Their pace should cause problems for the left-back who has been dribbled past a fair few number of times this season. The England international has created a few chances for teammates this season and should have support from Héctor Bellerín bombing on from right-back.

Santi Cazorla vs Alex Song
Arsenal have two playmakers in the middle with Santi Cazorla and Mesut Özil looking to create chances versus the packed West Ham midfield. Arsenal fans will know Alex Song isn’t the best protection of a back four – the Cameroonian gets beat time and time by defenders running at him, as well as conceding fouls. Cazorla and Özil could look to take him on to open up some opportunities for them, whilst they have targets out wide, and up front in Olivier Giroud to create chances for.

8 – Arsenal have won their last eight Premier League games in a row versus West Ham and are unbeaten in their last 13 fixtures against them (W11, D2).

8 – Theo Walcott has been involved in eight goals (5 goals, 3 assists) in his last four Premier League appearances versus West Ham.

9 – Alexis Sánchez has scored only one goal in his last nine appearances in all competitions for Arsenal.