West Brom’s 3-0 thrashing of Chelsea on Monday night guarantees a top 13 finish with a chance of finishing as high as 12th, but that would require a win at the Emirates. Tony Pulis’ side are unbeaten in their last five, winning three.

Arsène Wenger has an FA Cup final to prepare for next Saturday, so expect the home side to make a large number of rotations with nothing on the line in this game.

Mathieu Debuchy returns to training today in hope to be in contention for the FA Cup final but he will definitely not feature in the final Premier League game of the season.

Alex Oxlade-Chamberlain’s season is over. Otherwise Wenger has the majority of his squad available.

Ben Foster’s season has been over for a few weeks and Boaz Myhill has started the last eight, keeping four clean sheets in his last five.

The England goalkeeper is the only injury Tony Pulis has to deal with. 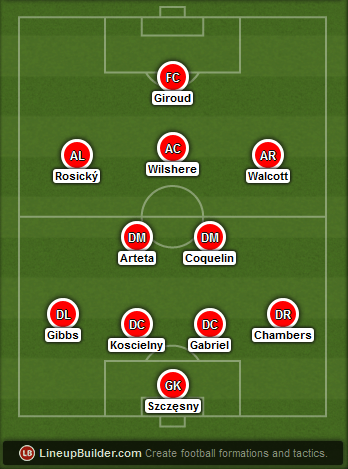 We’re expecting Wenger to ring the changes six days before the FA Cup final. If Wojciech Szczęsny doesn’t start on Sunday than he either starts next weekend or his future at Arsenal looks bleak. Calum Chambers should get a game this weekend and Gabriel is set for his fourth Premier League start since his January move. Francis Coquelin was rested midweek and Mikel Arteta has been back in training for a few weeks so should be ready for a start. Jack Wilshere could do with more game time, whilst Tomáš Rosický and Theo Walcott haven’t seen much action of late. Olivier Giroud has failed to start in his last six so Wenger may see this as an opportunity for the French striker to get back to goalscoring ways before the trip to Wembley. 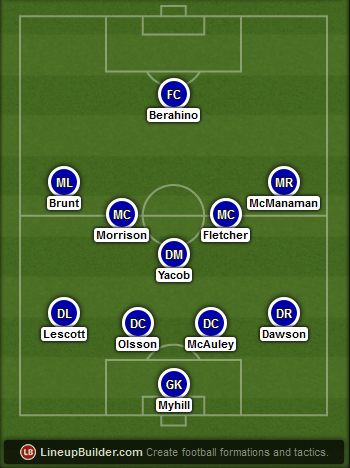 Tony Pulis can still take West Brom above his former side West Brom so we see him putting out his strongest squad and trying to finish the season unbeaten in six. This is the lineup that beat Chelsea in their final game at the Hawthorns this season and we don’t envisage any changes for their visit to North London.

Jack Wilshere vs Claudio Yacob
Claudio Yacob put in an excellent performance in the victory over Chelsea. The West Brom midfielder will be in for another busy game on Sunday with Jack Wilshere putting in energetic displays and running at opponents. The England international will have support from other creative players to keep Yacob busy.

Saido Berahino vs Gabriel Paulista
West Brom’s striker increased his value in the upcoming summer transfer window with a brace versus Chelsea last time out and has the potential to hurt the Arsenal defence, particularly if Wenger makes as many changes as we’re expecting. Gabriel Paulista has little Premier League experience and will need to be careful of Saido Berahino’s pace.

Theo Walcott vs Joleon Lescott
Arsenal have some pace of their own down the right wing with Theo Walcott. The England international will be keen to put in a great performance if he starts this weekend, hoping to impress the manager to get him the start in next weekend’s FA Cup final. Joleon Lescottis well-experienced to deal with the likes of Walcott but can really not afford to get too far forward because Walcott will do him for pace.

17 – Arsenal have scored in all 17 of their Premier League matches versus West Brom, totalling 35 goals.