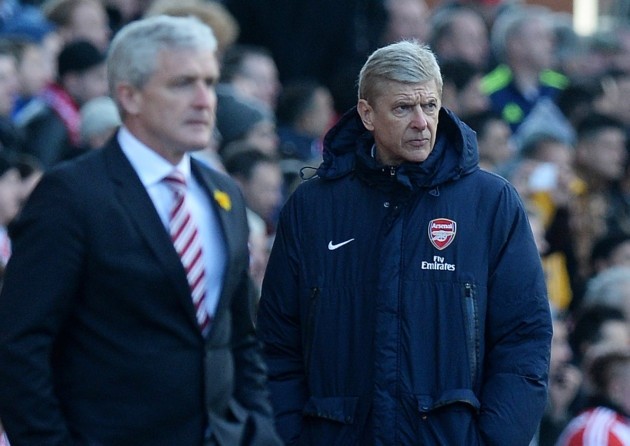 Arsenal came into the season with expectations and optimism riding high, but the story hasn’t been too good thus far. Seven points from four games is not the worst tally in the world, but there are several areas which clearly still need strengthening, despite Arsene Wenger’s adamance.

The Gunners are yet to score at home this season, and will be looking to make sure that that stat changes after Saturday. Their shock opening day 2-0 defeat at the hands of West Ham United was succeeded by a goalless draw against Liverpool. For a team that has been applauded so much for its attractive style of football over the years, Arsenal’s play has looked slow and laboured this season.

Their opponents Stoke are actually faring worse, occupying the last of the relegation spots with just two points on the board thus far. After successive top-half finishes under Mark Hughes, the Potters were expected to do even better this year, having signed some huge names like Ibrahim Afellay and Xherdan Shaqiri. But, it hasn’t worked out for them thus far.

The Gunners have Per Mertesacker fit again after missing the last couple of games with a virus. Gabriel Paulista has done well enough though, in his absence and so it remains to be seen whether the German goes straight into the side.

Striker Danny Welbeck has been sidelined until Christmas after undergoing a knee operation, while Jack Wilshere is a long-term absentee.

After trying his best to force a move away from the Britannia Stadium in the summer, striker Jonathan Walters has stayed on. Mark Hughes confirmed that he will play a part in this game.

Bojan Krkic is also in line for a return after recovering from an anterior cruciate ligament injury that has kept him sidelined since January. Fellow striker Mame Biram Diouf though, may be out with an injury, along with Marko Arnautovic and Glen Johnson. Hughes is though, positive that they will all be ready to feature.

Afellay and Charlie Adam, who were both sent off in last week against West Bromwich Albion, are suspended for this one.

– Stoke haven’t beaten Arsenal in North London since 1984, despite enjoying a lot of success over the Gunners at home.

– Going back to last season, Arsenal have scored in only 1 of their last 5 home games. They have picked up just 5 points from a possible 15 in this run.