Danny Welbeck scored the only goal as Arsenal returned to winning ways at West Brom on Saturday.

The Gunners have yet to beat a side currently in the top half and visitors Southampton are sitting in third as we head into matchday 14.

Southampton were brought down to reality on Sunday as they were hammered 3-0 at home by Manchester City. The Saints had held the defending champions to 0-0 at half-time before Morgan Schneiderlin went off injured.

Goalkeeper Wojciech Szczęsny has missed Arsenal’s last two games in which they have kept a clean sheet with Emiliano Martínez in goal. The youngster wasn’t exactly greatly tested over the weekend and the Polish goalkeeper may be fit to return for this fixture. David Ospina is still sidelined.

Both Nacho Monreal and Kieran Gibbs both picked up knocks at the Hawthorns but neither are expected to be serious and one of them should start at left-back on Wednesday. Matheiu Debuchy is a long-term absentee whilst manager Arsène Wenger has the rest of his defence available.

Mikel Arteta’s calf injury looks set to keep the club captain out once again. Jack Wilshere is out until February and Abou Diaby is always injured, so Mathieu Flamini and Aaron Ramsey will keep their roles in front of the back four.

Other injuries in the Arsenal midfield are Mesut Özil, Theo Walcott and Serge Gnabry.

Arsenal summer transfer target Morgan Schneiderlin picked up a thigh injury that will keep him out of this game. The difference between Southampton with and without their highly-rated holding midfielder was noticeable in the two halves against Manchester City over the weekend.

James Ward-Prowse has been out for a while and not expected to recover for a couple of weeks yet. Jay Rodriguez is expected to return to training in the coming week or so. 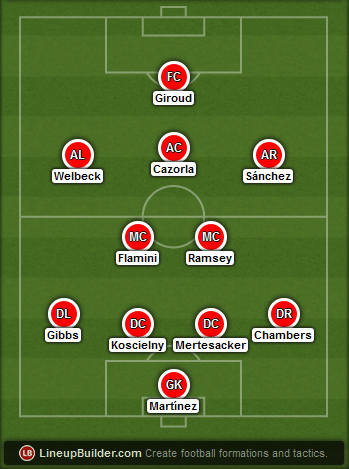 Arsène Wenger may not be forced into any changes from Saturday should both of his left-backs recover from their knocks. He may also have his first-choice goalkeeper back. However, he may wish to stick Alexis Sánchez in a central role – either up front or behind the striker. Sergio Agüero was very effective there without Morgan Schneiderlin in the way and Sánchez has the ability to do the same. Alex Oxlade-Chamberlain could play on the right wing but it would mean dropping either Danny Welbeck or Santi Cazorla. 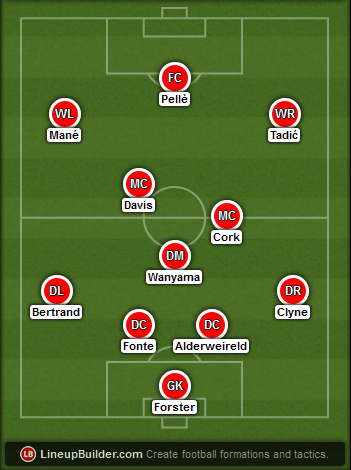 Toby Alderweireld pushed into midfield in the second half on Saturday and it simply didn’t work. Yaya Touré scored a goal and Agüero set up two. So we think Victor Wanyama will drop deeper and Jack Cork will come into the side. The attacking unit remains in tact.

Alexis Sánchez vs Ryan Bertrand
Depending where Arsène Wenger lines his star player up depends on which Southampton player(s) has the difficult duty of keeping Alexis Sánchez quiet. Should the manager go with the same attacking front four as the weekend then the Chilean will play out wide right, up against Ryan Bertrand. The full-back is quick and has made a good start to the season but will face his toghest test so far on Wednesday.

Santi Cazorla vs Victor Wanyama
Victor Wanyama has been a bundle of energy for Southampton this season and grabbed himself a couple of goals also. But it’s likely the Kenyan will have a much more defensive-minded role in this match with the absence of Morgan Schneiderlin. Arsenal should be looking to take advantage of this absence, and Santi Cazorla who did a great job in setting up Danny Welbeck’s winner at the weekend is in prime position to do so if he plays the central role. Aaron Ramsey hasn’t been heavily involved in the goals for a while either, but don’t be surprised to see the Welsh midfielder get on the scoresheet in this one.

Dušan Tadić vs Kieran Gibbs
Southampton’s exciting playmaker will be looking to exploit another defence this weekend. Arsenal may have kept clean sheets over Borussia Dortmund and West Brom, but Southampton will be no easy take. Dušan Tadić is a tricky customer and the Gunners are vulnerable to the counter-attack, so let’s see if the Serbian will cause them some problems. He cuts inside a lot too so will potentially running at the likes of Mathieu Flamini and Laurent Koscielny too.

Prediction: Arsenal 2-1 Southampton
We were correct with our one-goal victory for Arsenal over the weekend and are going for a similar prediction for Wednesday too. Southampton have started well but have lost the three biggest tests they have faced this season – Manchester City, Tottenham Hotspur and Liverpool. Morgan Schneiderlin is a huge loss to them and Arsenal are on a little bit of form over the past week.