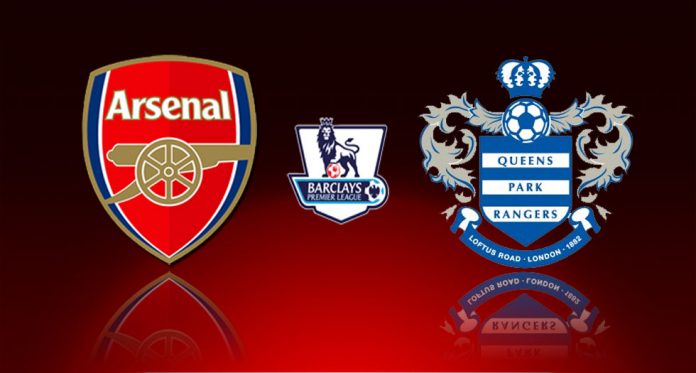 The harsh weather conditions means that there are many empty seats at the Emirates, despite the club claiming that tickets have been sold out.

Attendance at the Emirates is an embarrassment. The game is down as “sold out”. Sort out ticketing, @arsenal. Get fans in.

Penalty to Arsenal! Armand Traore concedes a penalty against his old club with a foul on Alexis Sanchez. MISS! Robert Green saves from Alexis Sanchez. Still 0-0. Arsenal firmly in the drivers’ seat 20 minutes in.

20 minutes gone and QPR are yet to complete a pass in the final third vs. Arsenal. Backs to the wall. pic.twitter.com/B4aF5ZJlX4 — Squawka Football (@Squawka) December 26, 2014

GOAL! Arsenal 1-0 QPR. The home side finally get the breakthrough, as Alexis Sanchez redeems for his penalty miss by heading in a Kieran Gibbs cross. Brilliant team goal.

RED CARD! Arsenal are down to ten men after Olivier Giroud is sent off for a headbutt on Nedum Onouha.

GOAL! Arsenal 2-0 Queens Park Rangers. Alexis Sanchez is this time the provider, setting up Tomas Rosicky to slot in and give the Gunners some breathing space.

PENALTY TO QPR! Mathieu Debuchy appears to get the ball off Junior Hoillett, but Martin Atkinson points to the spot. GOAL! Arsenal 2-1 Queens Park Rangers. Charlie Austin blasts it down the middle for his 12th of the season. Game on at the Emirates.

FULL TIME: Arsenal 2-1 Queens Park Rangers. The away side were dominant in the latter stages, but the Gunners just about manage to hold on for the three points. They climb back into 6th place ahead of Tottenham Hotspur.