AS Monaco are the visitors to Arsenal in the first leg of their UEFA Champions League second round this evening.

The French Ligue 1 side have improved their form over the past three months after a poor start to the season, and have conceded just one goal in their last 10 league games.

Arsenal have won eight of their last nine games in all competitions since losing at Southampton on New Year’s Day. Their performances in the league recently though haven’t been overly convincing – losing at Tottenham, narrowly beating both Leicester and Crystal Palace 2-1.

Jack Wilshere is unlikely to feature this evening, joining Aaron Ramsey, Mikel Arteta and Abou Diaby as confirmed absentees in the centre of midfield. Mathieu Flamini is also a doubt.

Mathieu Debuchy remains the only doubt in defence with Héctor Bellerín ready to return. 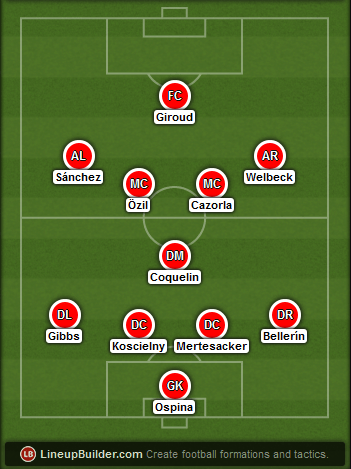 The only changes we see from Saturday’s starting lineup is the full-backs where Héctor Bellerín should be fully fit to replace Calum Chambers, and Kieran Gibbs in for Nacho Monreal. Danny Welbeck has played on the right for the past couple of appearances, pushing Alexis Sánchez to the left. Theo Walcott could replace his fellow England international though, but otherwise we don’t expect any changes from this XI. 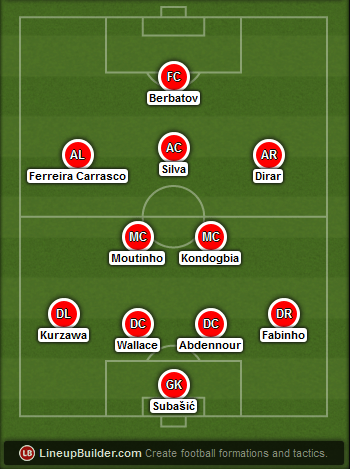 This is the Monaco side that have been defending immensely of late. Former Manchester United striker Dimitar Berbatov has been leading the line in a 4-2-3-1 formation with Yannick Ferreira-Carrasco their next biggest goalscoring threat, playing down the left wing.

Alexis Sánchez vs Fabinho
Arsenal’s star should give Monaco’s young Brazilian right-back a tough game. He does get beat when you run at him and he gives away his fair share of free kicks in a match. Alexis Sánchez is five games without a goal in all competitions for the Gunners but with a record of three in five in this season’s competition he’s capable of scoring against any defence.

Olivier Giroud vs Wallace
Injuries have seen the young Brazilian come in at centre-back this season. He’s only got 91 minutes experience of Champions League football under his belt and an in-form Olivier Giroud should be looking to get the better of him. Whilst the French striker doesn’t have any height advantage in this match up he will have supply from both wings and the middle, both aerially and on the ground.

Santi Cazorla vs João Moutinho
Two playmakers lining up on opposite sides – both will be asked to do their defensive duties this evening, most-likely against one another. João Moutinho certainly does make a contribution but he’s beatable when the top players are up against him and Santi Cazorla fits in that category. Looked for the Spaniard to create chances when his Portuguese opponent hasn’t closed him down early enough.

Prediction: Arsenal 1-0 Monaco
Monaco’s defensive record suggests they’re difficult to break down. Arsenal have experience of playing against Dimitar Berbatov and there aren’t too many goals in this team. We think a closely-thought first leg with Arsenal finding a way to win ahead of the return to Monaco.