The Premier League returns after the international break to see two of the pre-season top four favourites go head-to-head at the Emirates Stadium.

Arsenal head into the weekend in sixth position, directly above Manchester United, with one point separating the two giants.

Neither side has shown much consistency in the first 11 games of the season, whilst both sides have really been hindered by a lengthy injury list throughout the first quarter or so of the 2014-15 season.

Backup goalkeeper David Ospina is once again injured. This won’t prove costly provided Wojciech Szczęsny stays fit and does not get himself sent off.

Defenders Laurent Koscielny and Mathieu Debuchy remain sidelined, leaving Arsène Wenger with only four senior defenders as has been the case for the past five Premier League games. The back four of Calum Chambers, Per Mertesacker, Nacho Monreal and Kieran Gibbs have kept clean sheets in two of their last three league games.

Playmaker Mesut Özil is out for the long term, About Diaby is always injured and Serge Gnabry is lacking match fitness after a lengthy spell on the sidelines. Captain Mikel Arteta should be fit to return after missing the defeat at Swansea a fortnight ago. Theo Walcott should be fit enough to make his first start since January.

Danny Welbeck scored two for England last weekend and is expected to line up against his former club for the first time, with Olivier Giroud not yet ready to return from his injury.

David de Gea was a concern during the week with a hand injury but the Spanish goalkeeper is confident he’ll be fit to start between the sticks once again on Saturday.

Marcos Rojo is out until at least December with a shoulder injury. Phil Jones has played once for Manchester United since August and remains a doubt with a shin injury. Jonny Evans has missed the last six games and is also unlikely to be fit to start this one.

Rafael could make his return after missing the last two games. Should the Brazilian not be fit, Antonio Valencia would likely start at right-back once again.

Ángel Di María is to have an X-Ray on his foot before it is decided whether he is fit to start this weekend. Daley Blind could miss out with a knee injury picked up whilst on duty with the Netherlands. The summer arrival from Ajax has played 90 minutes in all of Manchester United’s Premier League games since arriving at Old Trafford.

Ashley Young is a doubt, Jesse Lingard is ruled out. Radamel Falcao may be sidelined again with his calf injury. 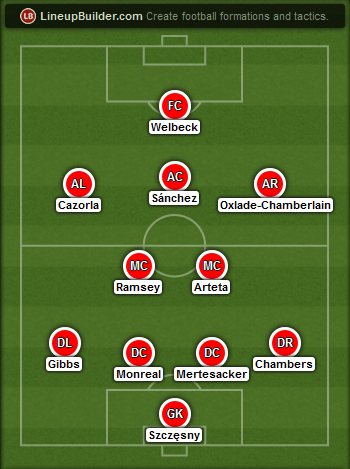 The Arsenal back four picks itself for the sixth Premier League games in a row. If Mikel Arteta is not fit to play, then either in-form Jack Wilshere or out-of-form Mathieu Flamini would likely replace the club captain. Theo Walcott is a possible starter on the right wing but we think Wenger will stick with Alex Oxlade-Chamberlain. 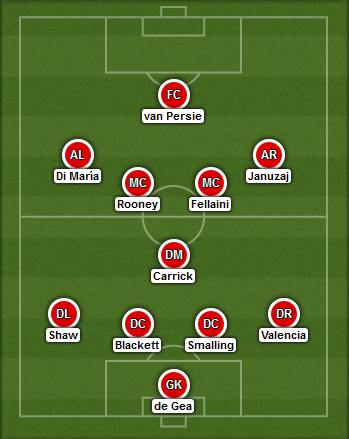 Manchester United’s back four defends on who’s fit. Paddy McNair is also an option but Tyler Blackett is the only fit left-footed centre-back and Louis van Gaal has been keen to play a left-footed player inside the left-back this season. Should Daley Blind not have recovered from his knee injury then either Michael Carrick or Darren Fletcher will play in front of the back four – Marouane Fellaini is not dependable enough to play this role, especially against Alexis Sánchez. Fellaini could start in midfield as the physical presence Arsenal don’t have an answer for.

Alexis Sánchez vs Michael Carrick
The Chilean playmaker is in as good form as anyone of late but will his trip to Chile during the international break leave him jetlagged? He was in action in the early hours of Wednesday morning UK time which may even make him a doubt for this game. However, should Alexis Sánchez have full energy, he wins this matchup hands down. The Arsenal star wins the battle for pace and power and won’t be afraid to run past Michael Carrick or win free kicks off the Englishman should he start. Marouane Fellaini dropping back to barge Sánchez around as soon as the opponent receives possession may be a tactic for United to slow him down, at least before the Belgian gets booked.

Ángel Di María vs Calum Chambers
Provided Ángel Di María is fully fit for Manchester United, the British transfer record signing has been a real star in his early days and has the possibility to be the match winner in this one once again. Arsenal’s Calum Chambers likes to bomb forward and also has a bad record with yellow cards – picking up six in his first 10 Premier League games for the Gunners. Expect the Argentine to whip some dangerous crosses in from the left and to also find space on the counter attack as Arsenal have left themselves wide often this season.

Wayne Rooney vs Mikel Arteta
Scored in both of England’s matches over the past week, Wayne Rooney heads to London in good form. The England captain also has a good record against Arsenal. Playing in his role behind the striker, Rooney is a good matchup for Manchester United against either Mikel Arteta or Mathieu Flamini, or even Jack Wilshere for that matter. Neither have looked so good defensively this season and Wayne Rooney should find open space in which to receive possession and exploit the opposition. A good long range shot on him, he’s not a bad shout to score in this fixture as a result.

Prediction: Arsenal 2-2 Manchester United
Both teams with injury problems at the back, although Arsenal’s current makeshift back four have played together for quite a few games now. The strength in these sides is clearly in attack, an whilst there was only one goal in the two games between these two last season, we’re expecting a few goals in this one. Perhaps sitting on the fence by predicting a draw, we think if there is a winner in this one it will come in the final 20 minutes or via a sending off or penalty incident.