The Premier League returns from the international break this weekend and kicks off with the most-anticipated match as Arsenal host Manchester City in the Saturday lunchtime game, live on BT Sport. Arsenal are slight favourites in the pre-match betting on Football-Bookmakers.com, and despite their early season form we can see City struggling at the Emirates.

Arsenal could hand a debut to Danny Welbeck who joined from Manchester United for £16 million on transfer deadline day. The England international will be in buoyant mood after scoring both goals in his country’s 2-0 win over Switzerland on Monday.

Arsène Wenger’s side were 3-0 winners over Manchester City in the FA Community Shield last month but don’t let be an indication of how this match may turn out – Manuel Pellegrini rested a large number of his first team for that match.

The Gunners were held 1-1 at Leicester City in their final match before the international break meaning they have only taken five points from a possible nine to start their season.

Manchester City were surprisingly beaten 1-0 at home by Stoke City before the international break. This was after an impressive start to the season that saw them beat Newcastle United 2-0 and then Liverpool 3-1.

The Citizens got their signings in before the closing days of the summer transfer window, meaning Manuel Pellegrini has had a good period of time to settle his new players in.

With Olivier Giroud out for the rest of the year, Danny Welbeck could play the striker’s role in this match. He is in contention with both Alexis Sánchez and Yaya Sanogo to do so.

Aaron Ramsey is a doubt after twisting his ankle during Wales’ 2-1 win in Andorra. The goalscoring midfielder is set to be a game time decision.

Mesut Özil missed Germany’s 2-1 win over Scotland but is fit to feature on Saturday.

Both Kieran Gibbs and Mikel Arteta are both fit to return. Gibbs has not played since picking up an injury in Arsenal’s season opener against Crystal Palace. Arteta has missed their last three games.

Theo Walcott is another 2-3 weeks away from finally making his return.

Stevan Jovetić is a doubt for this game after picking up a hamstring problem during training whilst away with Montenegro over the weekend.

Eliaquim Mangala is yet to make his Manchester City debut. 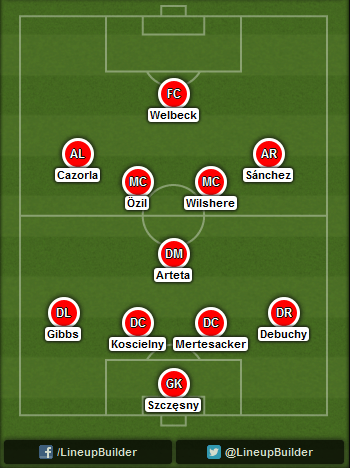 Jack Wilshere in for Aaron Ramsey if the Welsh midfielder is not fit to start. Danny Welbeck starting allows Alexis Sánchez to play on the right wing where he has started most of his games for Arsenal. 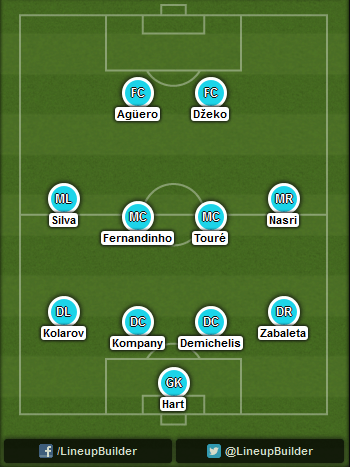 Fernando came off injured versus Stoke City. Fernandinho played well in the home fixture against Arsenal last season and played the majority of last season alongside Yaya Touré so would be a sensible selection if his fellow Brazilian compatriot is not fully fit. Edin Džeko can come in for Stevan Jovetić if the latter is injured.

Sergio Agüero vs Per Mertesacker
Manchester City’s Argentine striker is a good candidate to win the Premier League Golden Boot, provided he stays fit. Sergio Agüero causes all defenders problems with his movement, pace, dribbling ability and finishing. Per Mertesacker isn’t one of the quickest to say the least so look for the City striker to run at the tall German.

David Silva vs Mathieu Debuchy
Mathieu Debuchy is a very attack-minded right-back and if he bombs forward in this one look for David Silva to exploit the space on the counter-attack. Should the French defender stay back, look for Silva to beat him with his movement, dribbling and quick passes. Debuchy has been a bit flaky at defending to begin his Arsenal career and this is a massive test for the summer signing.

Alexis Sánchez vs Aleksandar Kolarov
Arsenal’s summer signing from Barcelona has two goals to his name now. Alexis Sánchez has yet to hit his best form but he’s dribbling past a number of opposition full-backs. His final ball hasn’t been there yet but with a new target to aim for in Danny Welbeck, could the England striker be the player Sánchez has been waiting to find in the penalty area?

Prediction: Arsenal 1-1 Manchester City
This was the scoreline when these two met at the Emirates Stadium towards the end of last season. Manchester City failed to score at Stoke City whilst Arsenal have already played out two score draws in their opening three Premier League fixtures.