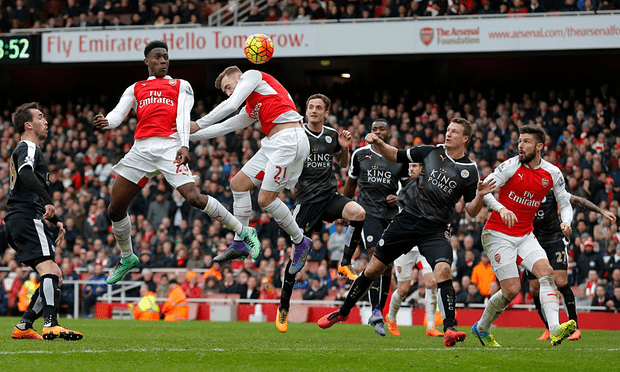 Jamie Vardy came close to opening the scoring in this matchup but Petr Cech managed to keep out his downward header. Arsenal then took control and many around the Emirates believed Olivier Giroud had broken the deadlock but his headed effort was deemed offside. Leicester did take the lead on the stroke of half-time as Martin Atkinson awarded the Foxes a penalty with Nacho Monreal accused of tripping Jamie Vardy, who went on to bury the penalty.

The referee was at the heart of things once again in the second half as he sent Danny Simpson off for two fouls worthy of yellow cards within five minutes. Theo Walcott was brought on shortly after, the Englishman made a huge impact on the game finishing coolly from Giroud’s knock-down to convert Arsenal’s first shot on target of the afternoon. Welbeck was brought on for his first appearance in 10 months but his side could not score; chances from Ramsey, Sanchez and Mertesacker all ended up inches wide or were superbly saved by Kasper Schmeichel.

As Claudio Ranieri’s men looked to have come away with a point, Mezut Ozil’s free-kick landed on the head of the returning Danny Welbeck who flicked the ball past Schmeichel for what was virtually the last touch of the game. This 2-1 win for Arsenal means they tighten the gap on Leicester who are clinching to that top spot.