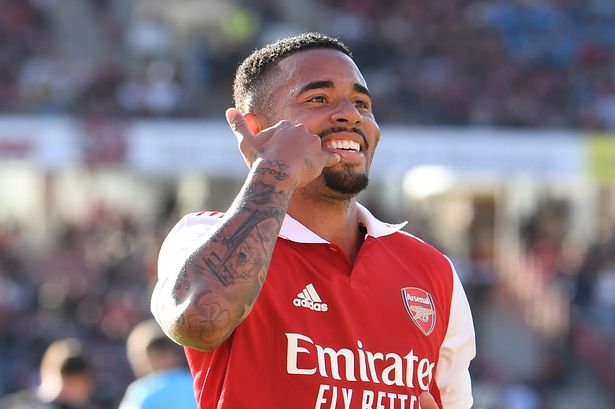 Arsenal welcome fellow Londoners Fulham to the Emirates Stadium on Saturday evening at Mikel Arteta’s team look to continue their 100 per cent start to the season.

How does £20 worth of free bets sound for the return of the Premier League? If you are yet to sign up with Virgin Bet, you can redeem yours within a matter of clicks.

Jesus arrived at Arsenal with plenty of expectation on his shoulders but he has lit up Mikel Arteta’s team and already looks at ease. He scored on his home debut with a sumptuous chipped effort against Leicester in a display which showed the variety of goals he can score.

The Brazil striker had a goal against Bournemouth chalked off my the tightest of offside decisions to will be extra hungry to score against Fulham and there’s every chance Jesus could run riot and grab a brace or more.

Martinelli looks stronger and faster this season after a summer in the gym. The winger scored in his first two games of the season but I’m backing him to turn provider against Fulham.

The youngster provided more assists than he scored goals last season and should get plenty of joy down the left hand side against Dutch right back Kenny Tete.

The boss’ reaction to Saliba’s stunner 🤩

If you enjoyed #BOUARS, you’ll love our latest Bench Cam 👇

Mitrovic has another chance to show he can mix it with the big boys at the Emirates but faces a stiff test up against William Saliba and Gabriel Magalhaes. The Serbian never shirks a challenge and his clinical finishing on opening day helped Fulham secure a draw against Liverpool.

The Gunners are still a work in progress meaning Mitrovic is likely to see a couple of good chances come his way and I’m confident he’ll put one away.

Assuming Mitrovic does indeed score, Arsenal will need to net three times for this bet builder to land but with Gabriel Jesus needing to score twice anyway that’s nothing to worry about. Manchester City apart, the Gunners have played the best football in the Premier League so far this term.

Some Arsenal fans are getting carried away with the club’s form and we have seen them brought back to earth with a bump before but I can’t see Fulham being the side to do that. Marco Silva has won three and lost three against Arsenal which is a respectable record but it will be another ‘L’ for him on Saturday night.