Arsenal will be wanting to put behind Wednesday’s UEFA Champions League misery behind them with three points at home to Everton this weekend to guarantee they finish the weekend in the top three.

Everton had it a little easier in Europe on Thursday, beating Young Boys of Bern 3-1 at Goodison Park, and 7-2 on aggregate. Roberto Martínez did name a number of first-team players in the starting lineup.

The Toffees have been under-performing in the Premier League this season, winning only six of their 26 matches as they sit in the bottom half.

Arsène Wenger has no additional injuries since midweek and is expected to welcome back Jack Wilshere this weekend. The Gunners boss is still without Aaron Ramsey, Mikel Arteta and Abou Diaby in the centre of midfield.

Mathieu Debuchy is still a long-term casualty – both Héctor Bellerín and Calum Chambers are available at right-back.

Bryan Oviedo is a doubt with a thigh injury having only played a full 90 minutes in the Premier League twice this season. Tony Hibbert is confirmed out but he’s a rarely-used backup these days.

Aidan McGeady is suffering from a knee injury. Everton have doubts over both Leon Osman and Steven Pienaar in midfield also. 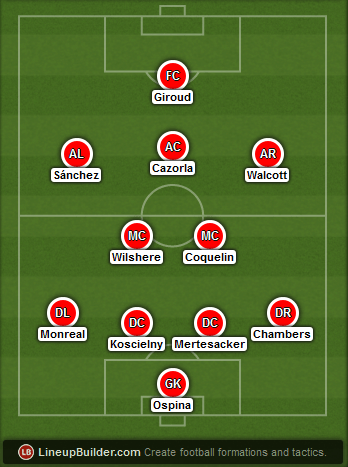 Arsenal got done on the counter midweek so we think Arsène Wenger’s got to play it safe with two holding midfielders in this game.  Jack Wilshere is ready to make his return too.  Mesut Öziland and Santi Cazorla hasn’t worked out over the past couple of games so this formation makes sense – with changes in both full-back roles and Theo Walcott replacing Danny Welbeck so the team is fresh. 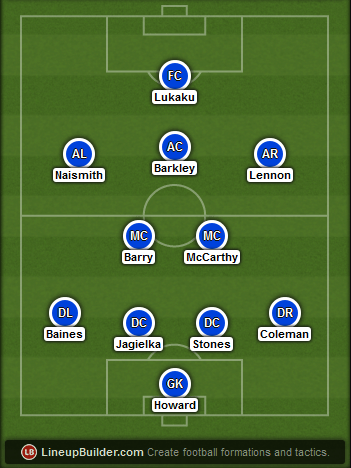 This is Roberto Martínez’s preferred back four and he was able to rest Leighton Baines and John Stones midweek. Whilst Gareth Barry did play on Thursday we think his performance versus Arsenal earlier in the season plus his experience will be counted on in this match. Kevin Mirallas has been working his way back into the side but Aaron Lennon’s pace down the right could be of use as it was to Yannick Ferreira Carrasco for Monaco.

Alexis Sánchez vs Séamus Coleman
When these two met earlier this season Alexis Sánchez had a quiet game playing as the striker. We think he’ll be back on the left wing where he has played the past two games. He’ll give Séamus Coleman a torrid time there as he had been doing to full-backs all season. Although it is worth noting that the Chilean is now on a run of six games without a goal in all competitions.

Santi Cazorla vs Gareth Barry
Santi Cazorla was a substitute when these two met at Goodison Park so Gareth Barry could be in for a new challenge. The Spanish playmaker hasn’t been so effective in recent games with Mesut Özil playing alongside him, and needing to drop back to defend. Cazorla does have the ability to beat Barry though and create chances for his teammates and that’s exactly what we’re predicting for this weekend.

Ross Barkley vs Francis Coquelin
Monaco showed what they can do on the break versus Arsenal three times on Wednesday and Everton should be looking to play in a similar way. They have the players capable of doing it to – Ross Barkley has the technique to spray the passes. He could have either Aaron Lennon or Kevin Mirallas on the right and Romelu Lukaku up front to spring the break. Arsenal will surely have looked at the footage and started to figure out how to prevent this though.

Prediction: Arsenal 2-1 Everton
Arsenal have not played well for a few games now but Everton haven’t played well at all in many Premier League games this season. Credit to Monaco’s defence midweek, they were excellent. Everton just don’t have that with the likes of Phil Jagielka and Leighton Baines. Olivier Giroud had an off-night last time out but he was getting in the right positions, Sanchez is a constant threat and the Gunners have two playmakers in the middle. Home win.