Arsenal are plotting a surprise move for Lazio youngster Keita Balde Diao, who is also a reported target of Manchester United and Liverpool.

Keita Balde Diao is regarded as one of the hottest young prospects in World Football today. The 19 year old Spanish striker who is a youth product of Barcelona’s famed La Masia academy had attracted the likes of Juventus, Liverpool and Manchester United over the summer. We had also reported in the summer that Lazio had rejected a €20m offer from Liverpool to keep the youngster in their ranks. 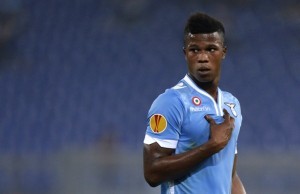 However, today’s reports from the trusted and reliable TMW have claimed that Arsenal are plotting a move for the 19 year old. Keita has been a long term absentee in the current Serie A season due to injury. However manager Stefano Pioli believes that the Spaniard is due to return against league leaders Juventus next weekend.

Keita had earlier joined Lazio in 2011 for a fee of just €300,000 after turning down a move to Barcelona. The youngster who has quickly moved up the youth ranks is believed to be valued at €30m.

He has a contract with Lazio till 2018 and the club has made it clear that their prized asset is not for sale. However, Keita’s future depends on himself and it would be interesting to see what would be the player’s decision if Arsenal do place a bid for him in the upcoming January transfer window.

Arsenal in recent years have spent big money on top talents, but mostly on establishes stars like Mesut Ozil or Alexis Sanchez. In that case, will they spend around €30m for a youngster remains to be seen.