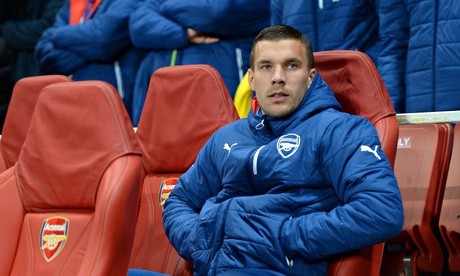 Troubled Arsenal striker Lukas Podolski is finally set to be given his exit route in January. Italian daily Corriere Dello Sport has reported that Serie A giants Inter Milan are in advanced negotiations to sign the German forward and want to complete the deal as soon as possible after the window opens.

Podolski has been on the fringes at Arsenal all season and there have been several talks of an exit in the January transfer window. The deal with Inter though, will see the 29 year-old join the Nerrazzuri on a free loan till the end of the season. Thereafter, the Italians have the option to sign him on a permanent deal for a fee in the region of €8 million.

According to CDR, Inter, now managed by former Manchester City Roberto Mancini, want to get the deal done quickly to enable Podolski to acclimatise himself with his new surroundings and teammates and be ready to play.

The 2010 Champions League winners have seen a dramatic downfall in fortunes in the last 3-4 seasons and currently lie 11th in the table. Despite not being able to participate in Europe’s most elite club competition in the Italian capital, Podolski may see this as an opportunity to play regular first-team football and get himself back in the reckoning with the German national squad.