Tomorrow night, Arsenal will have to overcome a two goal deficit against the omnipotent Bayern Munich in Germany in order to progress to the quarter finals of the Champions League.

Pep Guardiola’s side triumphed 2-0 at the Emirates last month, and considering the away goals rule, the Gunners have a veritable mountain to climb. 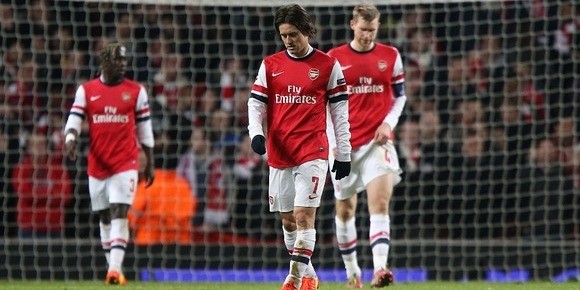 But Arsenal fans can take heart from the history books, with their side experiencing some phenomenal away day performances in the Champions League in recent years, something Arsene Wenger was quick to point out in his press conference today,

Wenger: “The statistics are against us, but we have won 5-1 at Inter, we have won everywhere in Europe.” #BAYvAFC

Check out our five-strong list of impressive Arsenal victories on the road in Europe’s premier competition:

Arsenal came from a goal down to beat a plucky Roma outfit thanks to a sumptuous hat-trick from Theirry Henry.

Antonio Cassano had put the Serie A side ahead early on, but three super goals from their now-legendary French striker saw the Gunners gain their first win on Italian soil for 22 years.

Aaron Ramsey’s second half header against last year’s Champions League finalists kept Arsenal on top of Group F, and sent a clear message to the rest of Europe.

With the win, the Gunners became the first English side to win at the Westfalenstadion, and took their unbeaten European away record to 15 games.

Arsenal’s stunning rout of Inter Milan consolidated England’s dominance over Italy at club level at the time, with Chelsea smashing four past Roberto Mancini’s Lazio in Rome only a month before.

The Gunners’ win was much more dramatic however, with Inter a more potent a force on the world stage, and with Arsenal on the brink of Champions League elimination before the victory.

While this is not one of the club’s happiest away days, it was a truly magnificent result, and one they need to replicate if they are to go through to the quarter finals this time around.

Arsenal took Bayern to the sword very early on, with Olivier Giroud tapping in early on to give Arsenal hope, but despite Laurent Koscielny’s late header putting the Gunners two up on the night, it was not enough to see them through.

Since then, Bayern have lost only twice in over 50 games in all competitions, which really proves the magnitude of this win.

A famous night that has lived long in the memories of Arsenal fans.

A star-studded, Galacticos-infested Real Madrid stood in Arsenal’s way in the last 16 of the Champions League, but despite the quality at the Spanish giants’ disposal, the Gunners came out on top thanks to Thierry Henry’s stunning solo goal.

With the win, they became the first English side ever to win at the Bernabeu.

What do you think? Which was the most impressive victory? Let me know your thoughts in the comments below…