I think we can all agree that Jack Wilshere is the most exciting young talent for English football. The ‘Next Generation’ (as if they are robots the latest update from apple the iball) of English footballers are being criticised, praised and scrutinised since the World Cup, Jack is one of the players leading the way for the youth across the country but the FA need to get this right. We’ve seen it all before, players who haven’t made it and cracked under the pressure of the nation. Look at players like David Bentley supposedly the next Beckham and the sharp fall from grace of Michael Owen, remember him in 98?

I’m wondering whether Arsenal is the best place for Jack Wilshere after some prods and mutterings. Looking at the setup that the Gunners have with quality youth streaming and Arsene Wenger as his mentor is fantastic for him. They are notorious for finding and producing some of the best youth players in the game and Jack has become one of these.

He will be playing alongside none other than Cesc Fabregas one of Spain’s actual Golden Crop. Wilshere should learn huge amounts from a European and World Cup winner. However, Cesc did play a bit part role in those tournaments for Spain usually on the bench so. It shouldn’t be forgotten that the Arsenal captain is only 23 years old, he is still incredibly young and learning himself.
You’ve got to remember as well that over recent years Arsenal have been producing players and teams that spectacularly do sod all. If Jack Wilshere continues at his level of play being at Arsenal will have him draw a huge amount of pressure and limelight at the Emirates which could be great for him or could be too much too soon. There’s no way to tell. 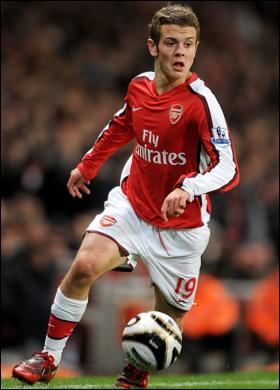 Jack could be better off at a club that can realistically win trophies regularly, being a part of a squad where he can get his head down and work on his game, but then would he get the game time? Well looking over to the Blue side of London Josh Mceachran is showing it can be done. He’s playing with Essien, Malouda, Ramires and Mikel who are undeniably a cut of the best midfielders on the planet right now if you can’t learn from then, there’s nothing anyone can do.

In my opinion, Arsenal is probably the right place for the young Jack Wilshere. Cesc, although young, is a talent he can learn from and Wenger will be a great mentor. I think it is important to nurture his talents; he needs to work for an International place and not be thrust in too soon because we are bored of Lampard or Gerrard. I really hope that we can finally get a few players who will perform on the biggest stage. What they don’t need is being branded as golden or the next … Beckham or Gerrard, does that really help anyone.

Finally, changing clubs will only disrupt him and that is the last thing he or anyone else need.