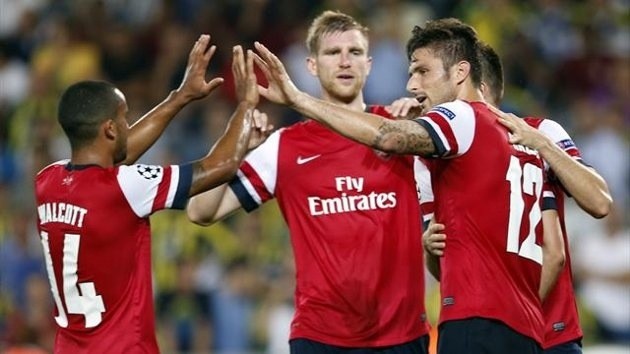 Arsenal’s Champions League doubts were cooled as they smashed Turkish team Fenerbahce with three goals in the second half away from home. Goals coming from Kieran Gibbs, Aaron Ramsey and Olivier Giroud.

The first half was a quiet one. Apart from a couple of chances from Walcott and Giroud, the game wasn’t the most interesting to watch. Arsenal saw most of the ball, though, despite the home fans really getting behind the team.

The game saw its first goal shortly after half-time. English left back Kieran Gibbs prodded in a close range finish with his right foot after Walcott squared the ball to him.

Arsenal began to take more control of the game as Walcott saw his effort saved by Turkish keeper Volkan Demirel minutes after the goal. Wilshere lashed a shot towards goal on the hour mark shorly after beating the Fenerbahce back line but couldn’t get it past the keeper.

The Gunners got their second goal as Welsh midfielder Aaron Ramsey, who had impressed throughout the game, struck the ball from long range. Volkan could only help the ball in as Arsenal celebrated a well deserved second.

Fenerbahce never really got into the game. Players such as Moussa Sow, Raul Meireles and Dirk Kuyt disappointed the home fans.

Theo Walcott was brought down by Kladec in the area with 12 minutes to go and picked up a yellow. Frenchman Olivier Giroud made no mistake to put the ball past Vulkan and seal a deserved victory in Istanbul.

Fenerbahce fans started out vibrant and loud, but as the goals began to come, many of them left.

Fenerbahce have a tough challenge when they meet Arsenal again in London. As much as Arsenal enjoyed the night, it’s not quite over yet. Laurent Koscielny picked up a face injury which saw Sagna utilise at centre back with Jenkinson taking charge of right back.

Arsenal will try to secure their group stage status in the second leg next Tuesday.