Arsenal could play a key part in solving the Angel di Maria saga.

Well, there was nothing complex in it. Di Maria was one of the key players for Real Madrid last season, but the club need to sell him having already signed James Rodriguez from Monaco.

The asking price varies from one newspaper to another, but Madrid based newspapers maintain that Real Madrid are demanding a fee in the region of €80m.

Manchester United and PSG are thought to be the two European heavy weights vying for his signature. PSG are keen to land him but they need to offload some of their stars, like Edinson Cavani or Ezequiel Lavezzi in order to balance the book.

Therefore, it gives Manchester United an option to negotiate at a slightly lesser price. This is where Arsenal could end United’s hopes. 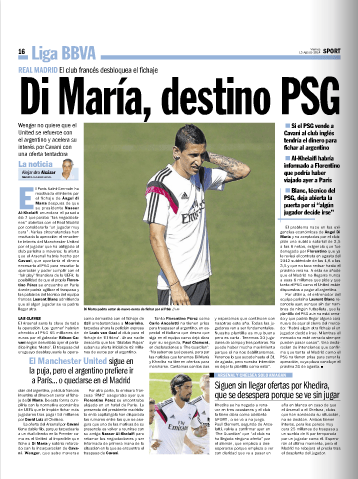 According to Catalan newspaper Sport, Arsenal who are looking to sign a world class striker, and preparing a €65m bid for Edinson Cavani.

Although PSG publicly maintain the stance that the player is not for sale, they would simply bite the hands of Arsenal, should such offer is put on table. Sport reckon that PSG would be able to sign Di Maria once they offload Cavani.

Last but not the least: This coming from a catalan based newspaper!