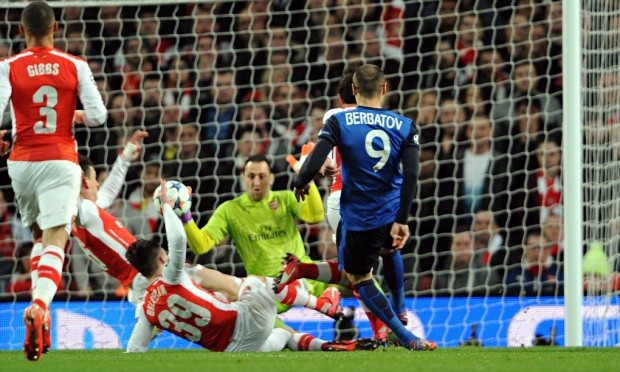 Arsenal face yet another humiliating exit from the Round 16 Champions League stage, after losing out 3-1 to Monaco at the Emirates.

Arguably one of the worst performances of the season from Arsenal, it led Arsene Wenger to criticize his team after math, saying “suicidal” defending cost them the match, if not the tie.

“It looks, when you have not that kind of sharpness, anything is possible,” the Arsenal manager said as quoted by The Guardian. “We were not at the level defensively. We were a bit unlucky as well because the first goal was deflected. But on the second and third goals, we were suicidal.

The pre-match build up that had hope and optimism written all over, were left to dust and barring an unexpected turnaround, the Gunners are heading towards five consecutive last-16 exits. In previous occasions Arsenal were knocked out by big teams like Barcelona, AC Milan and Bayern Munich. Wenger rightly said they never had an easy ride. This time there is no excuse. The Gunners were outright favourite to beat Monaco and yet they frustratingly produced one of the most shocking performances of the season so far.

What irks most is that despite knowing what Leonardo Jardim could throw at Arsenal, the team didn’t react as per the requirement. Frankly, was there any tactical surprise from Monaco at all? Wasn’t it not known to them that here is a side that are built on strong defensive record (just one goal conceded in the qualifying group stage) and an unadventurous side going forward?

Monaco remained compact in defence and looked for counter, while Arsenal carelessly gave away the possession. Mesut Ozil and Alexis Sanchez were utterly dissapointing – it’s Arsenal who are to blame for pressing the self-destructive button.

If Arsenal were sluggish going forward, defensively they were woeful. Their midfielders constantly left the defence exposed and less said about Arsenal defenders and specially Mertesacker, better it is. They never learn.

The problem runs too deep. Tactical aspects are secondary here, football battle is half won mentally. It is bloody psychological.

“We had the luck to come back to 2-1 and you do not have the right to give a goal away the way we did. That makes our task in the second leg extremely difficult. It looks like we have lost our nerves and our rationality on the pitch.

“The heart took over the head and, at this level, it doesn’t work. Mentally we were not ready, not sharp enough to get into this game. We paid for it.”

Mentally not ready? Not sharp enough? Are you kidding, Arsene?

Seriously? If mentally your side is not prepared to play Champions League knock out stage surely you do not deserve to play the competition at all.

Heart took over head? Lost out nerves? – All these comments show Wenger has failed to prepare his team mentally. It only reflects the same old problem that has plagued this side so long. No wonder why fans are clamoring for a change in management!

This is a ridiculous excuse one can give. Serious questions should be asked about the team and the manager. It seems like Arsenal have a psychological block in dealing with the Champions League (or better-to-say big occasions), which is not only frustrating but damaging at the same time.