The 2014 FA Community Shield on Sunday 10 August at Wembley Stadium will be the 92nd edition of the trophy.

Arsenal will face Manchester City for the second time in this final with the Gunners winning the previous meeting 4-0 all the way back in 1934.

Manchester United are the record champions of this trophy, winning 20 of the previous 91 matches. They are also the reigning holders following their 2-0 win over Wigan Athletic last August – David Moyes’ first match in charge.

The Red Devils were also the first winners of the Community Shield, or the Charity Shield as it was known in 1908. They beat Queens Park Rangers 4-0 in a replay in the inaugural final. It took place between the champions of England, Manchester United, and the Southern League winners, Queens Park Rangers, at Chelsea’s Stamford Bridge.

Manchester United were 2-0 winners over Wigan Athletic in last year’s final. The Championship side were making their third trip in five months down south to Wembley, having won their FA Cup semi-final against Millwall in April and the final by upsetting Manchester City in May.

The Latics brought a reported 6,500 all the way down to London with them. Having just been relegated to the Championship, not expecting to win and with many fans already forking out for two trips earlier that summer, credit to those who did enjoy the day in the capital.

Arsenal and Manchester City kicking it off in 2014

Arsenal and Manchester City will likely sell out Wembley Stadium on the day with both sets of fans excited for the season ahead – City the defending Premier League champions and Arsenal in optimistic mood following their FA Cup success in May. Many traveling fans will be looking to plan a weekend getaway around the Wembley game with reservations in nearby hotels booked up weeks in advance. Luckily London has plenty of alternatives for the late-planner – the Holiday Inn hotel in Brent Cross and the Holiday Inn at Kensington Forum are both great options for those traveling to London for the Community Shield weekend with their families.

The Community Shield is often seen by many fans as a glorified friendly, but for the likes of Arsenal with their massive fan base, it’s an opportunity for some of those who were unable to get tickets to May’s FA Cup final, a chance to enjoy the day our at England’s national stadium, supporting their team.

Both Arsenal and Manchester City will be in action the following weekend for the kick-off of the 2014-15 Premier League season. For the Gunners, they are in action six days after the Community Shield, at home to Tony Pulis’ Crystal Palace in the Saturday evening game. Manchester City start their season at Newcastle United on Sunday 17 August.

One rule different in this match compared to English league and cup games is that both sides are allowed to bring on up to six substitutes each. Seven players are allowed to be named on the bench. This gives both managers the opportunity to keep their first team relatively well-rested before their Premier League season begins the following weekend.

Manchester City are competing in the Community Shield for the third time in four seasons having won the Premier League title for the second time in three years. Manuel Pellegrini’s side won the league on the final day of the season but not as dramatically as they had done two years previously.

The Citizens blew a 2-0 half-time lead back in 2011 to lose 3-2 to rivals Manchester United with Nani scoring the winner four minutes into extra-time.

Roberto Mancini’s side came back 12 months later after winning the Premier League to beat Chelsea 3-2 in the final with goals from YayaTouré, Carlos Tévez and Samir Nasri in the space of 12 minutes.

Arsène Wenger will be in charge of Arsenal for his seventh Community Shield, having won four of his previous visits. The last time the Gunners played in this match was back in 2005, losing to Chelsea in what was the penultimate final played at the Millennium Stadium, Cardiff. 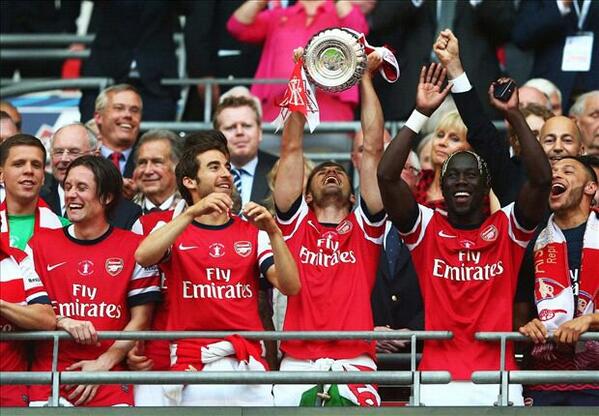 The French manager’s first two appearances in this competition came at the old Wembley Stadium. First, in double-winning side of 1998 destroyed Manchester United 3-0. Marc Overmars, Christopher Wreh and Nicolas Anelka scoring the goals on that day.

12 months later Arsenal came from behind to beat the treble-winning Manchester United 2-1 with goals in the second half from Kanu and Ray Parlour after Dwight Yorke had given Sir Alex Ferguson’s side a first-half lead.

Arsenal made it three in a row under Wenger in 2002 when Gilberto Silva scored the only goal of the game in beating Liverpool.

Manchester United would hand Arsène Wenger his first Community Shield final defeat in 2003 via a penalty shootout after both sides played out a 1-1 draw.

A year later and it would be Wenger’s side succeeding against Manchester United – Gilberto Silva, José Antonio Reyes and an own goal from Mikaël Silvestre gave Arsenal a 3-1 victory.

Ten years on from their last victory in this competition, Arsenal will be looking to win the shield for a 13th time. Only Manchester United (20) and Liverpool (15) have won it on more occasions.

For Manchester City, their history in this competition is not so intensive, winning four of their previous nine visits.

Arsenal so far have two new faces who can make their competitive debut in this match. Exciting forward Alexis Sánchez who has joined from Barcelona, and right-back Mathieu Debuchy who was signed from Newcastle United.

Manchester City took four points from Arsenal in the Premier League last season.  The Citizens were 6-3 winners in a thrilling game at the Etihad Stadium just before Christmas.  They then drew 1-1 at the Emirates Stadium at the end of March.

League champions Manchester City go into the match as favourites, but most neutrals will be hoping for another exciting final a week before the start of the new Premier League season.

Are you going to the game? Tell us your predictions in the comments below.