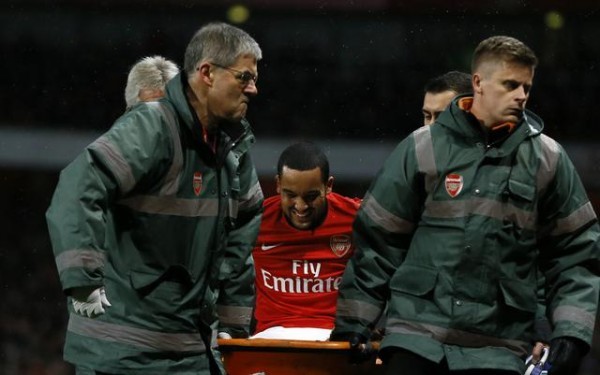 Good news for Arsenal fans. England winger Theo Walcott has returned to training again, while Arsene Wenger confirms striker Olivier Giroud is “ahead of his schedule” in his recovery.

Olivier Giroud, broke his tibia in the 2-2 draw with Everton at Goodison Park in August and was not expected to return before 2015, however, Wenger is hopeful he will be back in action earlier than that.

“Olivier Giroud is recovering very well. I believe he is ahead of schedule in terms of rehabilitation. The operation went perfectly,” Wenger told the French television channel beIN Sports.

“Welbeck and him can play together in the centre or separately. Welbeck also played on one side to Manchester United. Welbeck played in the same team with Rooney and Van Persie. He can play down the sides.”

The French striker had been ever present for Arsenal last season where he scored 16 goals. This season he has scored two goals in four games, including a last minute equaliser against Everton at Goodison Park.

Serge Gnabry, promising young Arsenal forward, who was out injured since March because of a knee problem, has also returned back to training on Monday.

Arsenal, however, are still without Mesut Ozil, Aaron Ramsey, Mikel Arteta and defender Mathieu Debuchy but the return of Walcott will give a strong moral boost to the Gunners camp.