Today’s game against Liverpool will determine whether Arsenal can keep up with the top two or get dragged into a battle for 3rd place with Liverpool. Manchester City, with a game in hand, are just 5 points behind.

But this is not about Arsenal’s title challenge or the Liverpool game. It’s not even about who Wenger should have signed in January.

I came across this AGM Report for Arsenal Holdings PLC from October 2005 – and while you can read the full transcripts here, I’ve pasted some of Wenger’s comments for your reference below (emphasis added):

14. AW said we WILL get it right. To be second last year was a disappointment but we had the 49 game unbeaten run and we won the FA Cup. The standard is very high. The home form this year is okay. The away form has been very disappointing. The Club has been hit very hard by the internationals. Many players have come back injured and the breaks have been disruptive.

15. However, AW said he is a strong believer in the quality of the present team. He said he wanted to elaborate on the reason we are in the present position. He said he tried to anticipate the new stadium. He thought the finances would not be available for him to invest in the team so he put a lot of emphasis on developing young players. The current balance in the squad is not right. 50% of the squad is in their early 20s and the other 50% are close to 30 or over 30. The squad is unbalanced in the 24 to 28 age range. AW tried to correct that in the summer and will further try to address this in January.

16. AW said this demographic problem is not a problem when all the players are there, but shows itself when some key players are injured.

19. Arsenal has a strong ambition to be the best club team in the world. At the start of the season there was a lot of negativity in the media about Arsenal’s prospects. Wenger said he does not share this view “AT ALL”. We have to stick together and develop the Club together.

I don’t subscribe to the view that Wenger is happy to build a football creche instead of a football club, or that Wenger has lost any ambition. I know that’s been said by certain Arsenal fans this season, with few of them calling for his head, but that’s not the answer. It’s not just about young players.

I do believe that Wenger feels a responsibility to limit expenditure so that Arsenal can pay off their debts as quickly as possible without compromising on their on-field performances, and that this is a delicate balance that sometimes means he can’t bring in the right players to win titles.

But the biggest issue for me is that Wenger knew that his squad was unbalanced back in October 2005. Since then, he’s worked to redress that balance by bringing in the likes of Rosicky, Nasri, Sagna, Arshavin and Vermaelen (to name a few), but they have come in at a slow pace, one per transfer window, and with some key experienced players leaving, you’re left with a squad that still needs that experience in depth when they have injuries.

So it’s worked against Arsenal in both directions. While they haven’t brought in players quickly enough, they’ve also let key players leave at a regular rate. If you have only one of these situations, then the club can handle it by balancing it out on the other side. But if there’s a problem on both ends, you’re left with a situation where key players are unhappy at the lack of ambition shown by the club and start angling for moves away. 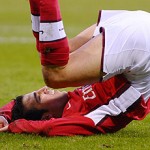 On last week’s Soccerlens Podcast, Adrian and Iain discussed the possibility of Cesc Fabregas leaving for Barcelona this summer. An interesting facet of this discussion was Fabregas being considered more important to Arsenal’s title ambitions than Arsene Wenger, and given that if Wenger stayed the recruitment policy and playing philosophy would not change, the only way to keep Fabregas at Arsenal would be to let Wenger go.

While I don’t subscribe to that view, given the departure of key players in the past few years and the persistence of Arsenal’s troubles (It’s 2010, and Wenger is still trying to fix the problems of 2005), it would be foolish for any player to stick around if they got a better offer from a bigger club.

And maybe that’s what it’ll come down to in the summer – whether Arsenal (not Wenger) can convince Fabregas that he will win titles at the club or not. He’s not Gerrard and it’s not his hometown club (and Gerrard is lying if he says he doesn’t regret leaving when he had the chance), so the key for him is going to be tangible results on the pitch.

If that doesn’t come about, then after years of promises, Fabregas could be headed back to Spain and with him gone, maybe Wenger will finally have enough money to fix all of Arsenal’s problems.