A new twist in the William Carvalho saga, as we enter the final week of the summer transfer window.

Just a quick recap. Throughout last season, we saw, Manchester United were heavily (and by heavily by mean massively) linked with a move for Carvalho.

Chelsea were also interested but United were almost certain to sign him with several media outlets even reporting that a deal had been struck.

But, following David Moyes’ sacking, Manchester United never showed that same level of intensity to sign Carvalho. In fact, they have no interest at all.

Chelsea do have an interest in him, but it is Arsenal who is making all the noises to sign the highly rated Portuguese international.

The Gunners have shown keen interest in signing him and have lodged two offers already. Both were rejected.

Sporting only owns 60% of the player’s economic rights, therefore it is imperative they would want to squeeze out maximum profit out of the deal.

The club want to sell him at €45m, his buy-out clause, but knowing that no clubs are interested in paying that amount, they are willing to lower their asking price.

The problem is Arsenal is, they want to pay the amount in two instalments, which Sporting are refusing to entertain. 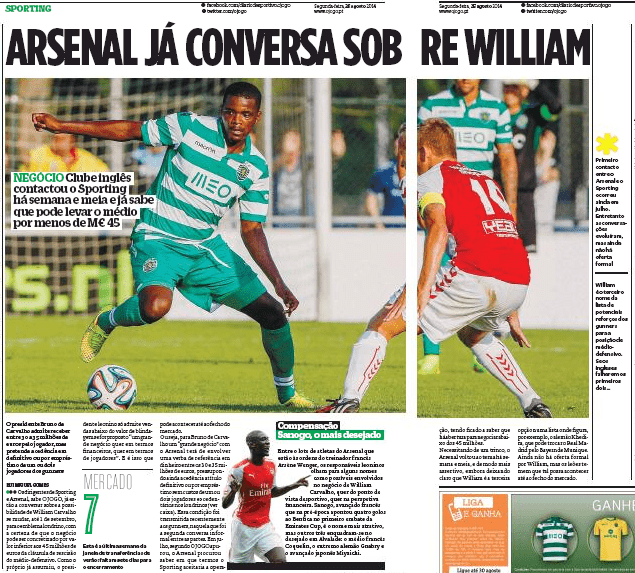 According to the latest report from O Jogo, Sporting are willing to sell Carvalho for €30m-€35m to Arsenal but want a) direct payment and b) one or two players on loan.

Sporting last week sold Marcos Rojo to Manchester United where they signed their former player Nani in return on loan.

They want a similar sort of deal to happen. Yaya Sanogo is the player that most pleases Sporting in case a deal with money and players was to be struck. Gnabry, Coquelin and Miyachi are also seen as interesting prospects.

Over to you, Arsene Wenger!