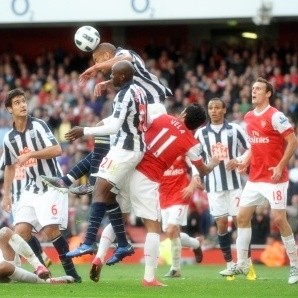 I live a stone’s throw away from the West Bromwich Albion ground. Its a great club, packed with wonderful supporters, many of which mirror the people of West Midlands, bubbly and friendly. The team plays lovely football, and many of my close friends are season ticket holders and we relive the beautiful football both Arsenal and West Bromwich Albion play.

As much as I have a soft spot for the Albion, Arsenal are always number one. I have always maintained that if Arsenal were to lose to a team, and they play fair, good football, then their can be no complaints, especially from me.

It is not a Premier League season for Arsenal without an embarrassing defeat. Last season was Wigan away, the season before that was Hull at home, before that was West Ham, well you get my drift. A 3-2 defeat at home to a team that boing-boings their way from relegation to promotion season after season sends shock-waves around the football world.

Frankly, for a team that aspires to be the League champions, it’s really unacceptable. West Brom lost away to Chelsea, shipping 6 goals. However, they got to grips with the league, recently beating Manchester City in the Carling Cup, and for me the most impressive result in beating Birmingham 3-1 at home. Birmingham do not concede many, and most of the time, the top teams find it hard to beat them.

So when West Brom came into town, never did I think for a second this would be an easy game. My fears were confirmed, with Albion controlling the game, missing a penalty. Of course, Arsenal had their moments, but when you want to be at the top, your every move is scrutinized.

To concede three goals, is honestly a complete joke. It doesn’t matter that Arsenal played 120 minutes midweek, and have injuries. It is in Arsene Wenger’s best interests to strengthen the team. By that I mean, of course Van Persie and Walcott will get injured, as well the fact that Nicklas Bendtnar came back from the World Cup injured.

No bite in the attack, with Fabregas out, no creativity. Arshavin and Narsi are wonderful to watch, but were the rest of the team? I cannot add to the questions surrounding Almunia as what point would there be? The world and his wife know Almunia has a loser mentality. He costs games and is probably the worst ever player to play for Arsenal.

I think Wenger needs to give a reserve player a chance. His dreams of winning the league are crashing and dying every time Almunia is on the team sheet.

I really hope this is a one off, but the set back is huge. With Chelsea losing to Man City, then the gap would have been only a point. The good thing is that Arsenal can get right back in it, with a win at Chelsea next week. However, with the defending and goalkeeping better suited to an amateur team, I really don’t have the highest of hopes.

The best thing with this time of the season, is that the games come thick and fast, so there would be no point dwelling, as we have a reunions with Eduardo and Ashley Cole coming up. Manchester United are having defensive problems of their own, but who cares? They always have a slow start, but get better throughout the season.

They only picked up a point and failed to capitalize with a draw at Bolton. So there is no major gap forming between the top teams. Arsenal have got let off, big time. Although the pride is hurt, and it will be difficult to pump my chest out wearing my beloved shirts around my area, I am just thankful that Arsenal are still in the race!