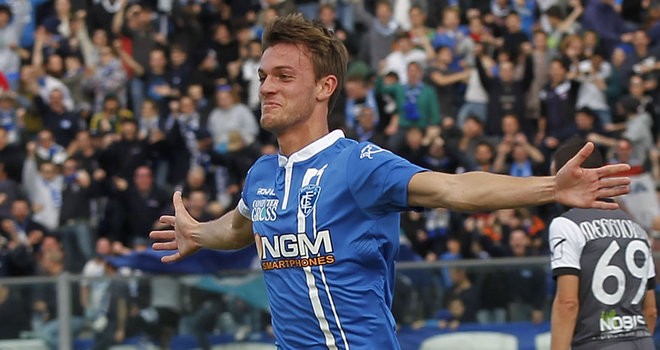 According to CalcioMercato, Arsenal have submitted a formal bid for Juventus defender Daniele Rugani.

The report states that the London club have offered 15 million euros upfront with an excess of 3 million to be paid in bonuses.

Rugani is a Juventus player on loan at Empoli. The Italian centre back has a strong positional sense and his imposing presence makes him an ideal candidate for a Premier League team.

Arsene Wenger is keen to find a replacement for Per Mertesacker as well as add to his defensive unit. The Frenchman has identified Rugani as a possible candidate and is willing to break the bank for the young centre half.

18 million euros seems like a steep amount of money for an unproven Serie A defender, but Wenger’s eye for a talent is beyond question.

Rugani has had a good spell of development away from Juventus and was expected to return to his parent club and get into the first team fold next season. However, with the money offered it seems likely that the Turin giants will let go of the Italian.

A defender, central midfielder and a striker are key to Arsenal mounting a proper title challenge next season and it seems Arsene Wenger has found the first part of his jigsaw in Rugani.

The London club have also been linked with Morgan Schneiderlin and Karim Benzema.