It was tough, but Arsenal managed it.

They played their hearts out, but in the end, they had two dodgy free kicks and subsequent set piece goals to earn them a point (and with their superiority, it could easily have been three points).

Arsenal had several chances – two coming off the bar, another shot over by Adebayor, one more ruled offside in a very, very close call.

But they couldn’t make them count. Adebayor isn’t the free-flowing finisher, Rosicky is too involved in creating chances and Hleb dithers on the ball. Fabregas and Silva are never going to be Lampard – Fabregas may yet turn on the physical side of his game but it looks highly unlikely under Wenger.

Henry said yesterday that injuries had hampered Arsenal’s progress this sesaon. I think that this level, your squad should be strong enough to cope with injuries. Manchester United came second last season despite their horrible spate of injuries mid-season, remember? Testicular fortitude, they call it. Right now, Arsenal have a handful of players showing that sort of attitude.

Silva is quiet and efficient but he’s no leader. Gallas has too much baggage with him to be the ballsy motivator, although he’s a damn fine defender. Lehmann showed today that it is ridiculously easy to incite, elbowing Berbatov (who, to be fair, was looking for it) when he should have kept his nerves. Eboue and Clichy and Hleb have talent but they need time.

Baptista is the real worry. Part of me wonders if playing him is a sadistic ploy by Arsene Wenger to damage a Real Madrid player for life – in a “you took Reyes away, you almost took Vieira away, now you want Fabregas? I’ll show you!” kind of way. Watching him, every single Arsenal fan must be expecting him to miss. It’s hard on the Beast, and he, like Hleb, is certainly a better player than he lets on in an Arsenal shirt.

Ljunberg is finished, btw. Get him out of here.

Where do Arsenal go from here? They have to win the remaining games, for sure, but they also have to look at certain things and tweak them now rather than in the future.

Diaby has a temper problem, so does Fabregas at times (Diaby is worse though). At this age you want to get them to focus that energy on their game instead of on the opposition.

Toure needs to shout more at his teammates. Gallas may not like it, but he’s not the defensive leader in Arsenal, Toure is. Maybe that is causing problems too?

Arsenal need to learn how to play without Fabregas. It’s like United learning how to play without Ronaldo – it’s hard but you have to learn it some time or the other. In the first half Arsenal were more hampered by Ljunberg’s presence than by Fab’s absence, so perhaps putting someone with more pace there would have helped Arsenal.

This squad is young, and yes, they need time, but this squad also needs a proper touchline-hugging pacy winger and a keeper who doesn’t walk 20 yards out of his area to push the opposition on the ground. Other than that, give this side a couple of years and they’d be good to go.

A few words on Tottenham as well:

Tottenham, who were played off the pitch in the second half and showed once again that they can’t mix it up with the big boys, will go back wondering why Zokora and Jenas – so energetic in the first half, couldn’t handle Fabregas and Diaby.

Tottenham fans should ask Jol why he took off their most potent attacking threat – Aaron Lennon – in a home game with the match hanging in the balance. They should also ask why the team isn’t mentally strong enough to

Dawson has been great for them all season, and so has Jenas, Keane, Lennon and Berbatov. I wouldn’t be surprised if all of them came under transfer bids this summer. Rocha looks half-decent as well, but Huddlestone is a bit dodgy in my mind, and while Tottenham do have the talent in the bag they lack the mental strength to push through.

Someone bring in a 30-year old Davids to Spurs, and they just might make it to 5th spot next season. Frings baby, Frings. Like it or not, Tottenham need experience in the midfield (alongside Jenas, Zokora is too raw and won’t be better than a backup) and someone in the management to toughen them up during games like these.

Is Martin Jol the man for the job? For Tottenham’s sake, let’s hope so.

Is Adebayor a Wraith in disguise?

And now for the picture up top – it’s from Arsenal’s previous game, but watching that picture and then watching Adebayor for today’s game, I kept wondering:

Doesn’t Adebayor resemble the Wraiths from Stargate: Atlantis? I mean, change the skin color and you have the same facial structure. Come on, no one? 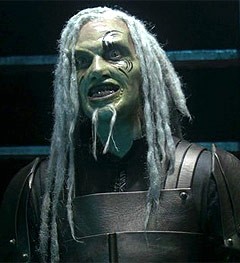 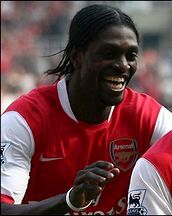