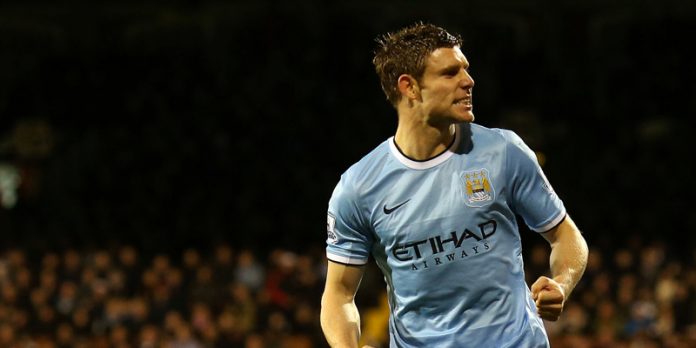 Both Arsenal and Liverpool are hoping to sign Manchester City midfielder James Milner this summer, with the England man reportedly telling the newly crowned Premier League champions of his desire to leave the club.

Milner, 28, has played a bit-part role at City for the best part of four years, and the Guardian have reported that he has finally had enough of being a super-sub, with FA Cup winners Arsenal said to be leading the chase for his signature ahead of Liverpool.

Manchester City are facing something of a dilemma in light of Milner’s wish to leave, with the club only with Joe Hart as a potential first-team Englishman, and if Milner left, City would have to act so as to comply with the homegrown player rule, especially considering Joleon Lescott, Gareth Barry, Jack Rodwell, Micah Richards and Scott Sinclair are also set to leave this summer.

Milner is said to have told City of his decision last month, and is so set on leaving that he is prepared to see out the last year of his current contract so as to leave on a free next season, rather than succumb to the untold riches of the English champions, who are eager to tie him down with a new four-year contract.

Arsenal, who ended their nine-year trophy drought on the weekend, are willing to offer £10m for the want-away star, who is part of Roy Hodgson’s England squad for the World Cup this summer.

Everton and Tottenham are also said to be monitoring the situation, but Milner reportedly fancies a move to either Liverpool or Arsenal, and his decision could ultimately rest on who is willing to play him in central midfield, his preferred position that has been denied of him during his time at City.

What do you think? Would James Milner be a good signing for either Liverpool or Arsenal? Get involved in the comments below…