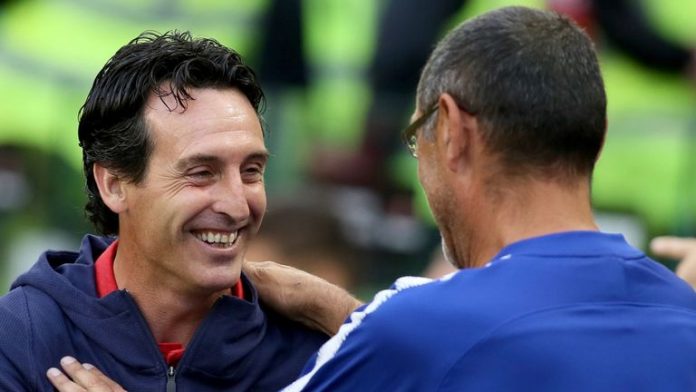 Arsenal and Chelsea are in action on Thursday evening aiming to book their places in the semi-finals of the Europa League.

The Gunners take a 2-0 lead into their game at Napoli, while the Blues hold a 1-0 advantage over Slavia Prague ahead of their meeting at Stamford Bridge.

Read on as we preview both matches.

Arsenal visit Naples for the second leg of their quarter-final tie knowing that they are likely to spend most of the 90 minutes on the back foot.

The Gunners dominated the first meeting at the Emirates Stadium, with an Aaron Ramsey effort and a Kalidou Koulibaly own goal securing a deserved victory inside 25 minutes.

However, Unai Emery’s side may be left to regret not adding to their tally against a side who have been impressive at home in this competition.

Napoli are unbeaten at the Stadio San Paolo in the Europa League this term, scoring 10 goals and conceding just twice in five matches.

Carlo Ancelotti’s side have lost just once on their own patch in Serie A this season – 2-1 against champions-elect Juventus back in March.

Despite that impressive record, Arsenal are odds-on favourites at th.betway88.com/ to make it safely through to the last four.

Their away record is a major cause for concern, with their league victory at Watford on Monday only the third time they have won on the road in their last 13 outings in all competitions.

The Gunners will probably need an away goal to progress, meaning it could be worth backing Napoli to win the game and both teams to score at odds of 2/1.

Arsenal fans may well be in for an extremely nervy night, but the improving Premier League club are fancied to edge through to the last four where they would face either Valencia or Villarreal.

Chelsea expected to cruise through

With an away goal in the bag and a home tie to come, Chelsea should cruise through to the semi-finals this evening.

Marcos Alonso’s late goal secured a 1-0 win from a difficult match in Prague and the Blues should find things much easier at Stamford Bridge.

Chelsea, who won the competition in 2013, have won their last eight Europa League ties on their own patch and are confidently tipped to extend that record.

Maurizio Sarri’s side can also equal Atletico Madrid’s record of 15 games unbeaten in this competition if they avoid defeat against the Czech team.

Chelsea will need to perform better than they did over the weekend, with their 2-0 defeat at Liverpool knocking them out of the top four in the Premier League.

However, Slavia have lost all six of the European ties in which they were beaten at home in the first leg.

They have defeated English opposition just once in 10 attempts and won only three of their previous 27 European away matches.

Chelsea have triumphed in all 11 European ties in which they have won the first leg away from home and look a good bet to progress to a last four tie against either Eintracht Frankfurt or Benfica.