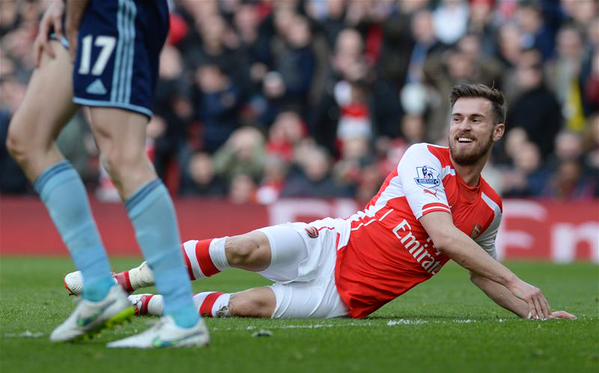 Arsenal will be in third position at the end of the weekend following a comfortable 3-0 victory at home to West Ham this afternoon.

Olivier Giroud opened the scoring on the stroke of half-time after an excellent passing move, before Aaron Ramsey and Mathieu Flamini each scored in the final 10 minutes to add the icing to the cake.

West Ham offered the odd threat down the wings in the first half hour but aside from Kevin Nolan’s half volley, David Ospina was not forced into another save all game.

Arsenal had 75% of the possession in the first half, finishing the game with 65%. They controlled the ball, the territory and fired nine shots on target, compared to West Ham’s one.

Even with Arsène Wenger leaving Santi Cazorla on the bench until the 71st minute, the Gunners were able to play a nice passing game with the likes of Aaron Ramsey and Mesut Özil seeing a lot of the ball in West Ham’s half.

Their eight consecutive league wins at home should have many sides fearing coming to the visitors between now and the end of the season.

2. Aaron Ramsey is back

After being sidelined for a large part of the past 14 months, Aaron Ramsey justified Wenger’s decision to start him this afternoon with a fantastic performance in the centre of the pitch.

The Welsh midfielder came close to score in the first half but couldn’t make proper contact six yards out. He got his goal nine minutes from time after a nice one-two with Olivier Giroud after Arsenal caught West Ham napping from a throw-in.
Ramsey had set up Giroud’s goal at the end of the first half and saw more touches of the ball than any other player today in a man of the match performance.

It’s now eight consecutive Premier League games without a win for Sam Allardyce’s side as the pressure continues to grow on the manager.

Today he was without three of his regular back four and Diafra Sakho was the only striker available to him – perhaps he can be forgiven for today’s result (it was 1-0 with 10 minutes to go as they began to throw men forward).

The Hammers are still a top half side and whilst the results over the past 2.5 months have been disappointing, it would surely be a bad move to relieve him of his duties right now.