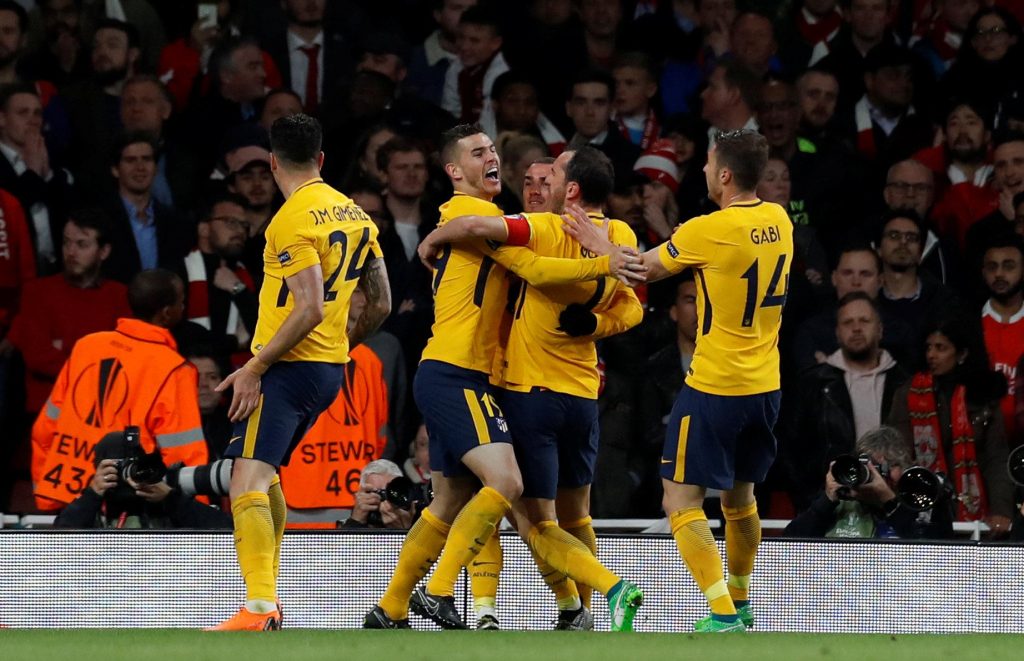 Arsene Wenger’s hopes of winning his first European trophy as Arsenal manager before stepping down in the summer took a dent on Thursday night, as a ten-man Atletico Madrid worked hard for a 1-1 draw at the Emirates Stadium.

The Gunners found themselves in the ascendancy in the Europa League semi-final clash when Sime Vrsaljko was given his marching orders early in the piece, with Diego Simeone banished to the crowd not long after.

Arsenal had chances to punish Atletico but wastefulness in front of goal and heroics by visiting goalkeeper Jan Oblak thwarted the hosts.

While Alexandre Lacazette did finally break the deadlock on the hour mark, a late Antoine Griezmann strike leaves things in the balance ahead of next week’s return leg in the Spanish capital.

Here are three major observations from the game.

Wenger’s reign as Arsenal boss will be remembered for free-flowing football and attacking impetus, but a frailty at the back has characterised the Premier League club over the last decade.

With the Gunners 1-0 up and needing to close out the game, Griezmann’s away goal means Atletico will be favourites to make the final in Lyon ahead of the return leg.

Laurent Koscielny has been a loyal servant for Arsenal but the 32-year-old is no longer at the required level for a club with ambitions of silverware and Champions League football.

Both the French veteran and centre-half partner Shkodran Mustafi have looked susceptible this year and the task of limiting an isolated Griezmann was one that proved just too difficult.

All the successful Arsenal sides of the Wenger era have had a defensive leader – this team does not.

Diego Costa will surely return next week and will be licking his lips at the prospect, while the Gunners need at least one new centre-half this summer.

Aubameyang the missing link for Arsenal

Despite Griezmann’s goal close to the end of the game, Arsenal had enough chances before the France international struck to have effectively ended the tie as a contest.

Lacazette took his goal well with a powering header, but the centre forward was guilty of missing clearcut chances to fire the Gunners towards the final in Lyon.

With others such as Jack Wilshere and Danny Welbeck also failing to find the net when presented chances, Arsenal’s dominance in the game was not capitalised upon.

The Gabonese forward has already netted six Premier League goals in nine outings since moving to North London in January and his clinical approach will be needed if Arsenal are to challenge next season.

Regardless of the intricate attacking play that Arsenal showed last night, and have displayed throughout Wenger’s tenure, a clinical edge is needed to compete at the highest level.

The contrast in the two managers could not have been starker in this clash, with the reserved Wenger taking on blood-and-thunder Simeone.

This disparity in the characters of the respective coaches is an interesting side-plot as Arsenal look to find a new man in the dugout.

While Simeone’s animated approach may have gotten him sent to the stands, his Atletico players were, and constantly are, fully aware of the standards and expectations he demands of them.

The passion, will-to-win and determination of the Argentine is opposite to the pragmatic outlook that Wenger has adopted during his time at Arsenal.

Koscielny and co would not have been overly worried about Wenger’s response in the dressing room after allowing Atletico to equalise – the same would not have been the case if the shoe had been on the other foot and it was Simeone they had to answer to.

While the South American is too tactically defensive to be considered as a replacement for Wenger at Arsenal, someone who could evoke similar passion in the Gunners players would certainly be a welcome change.