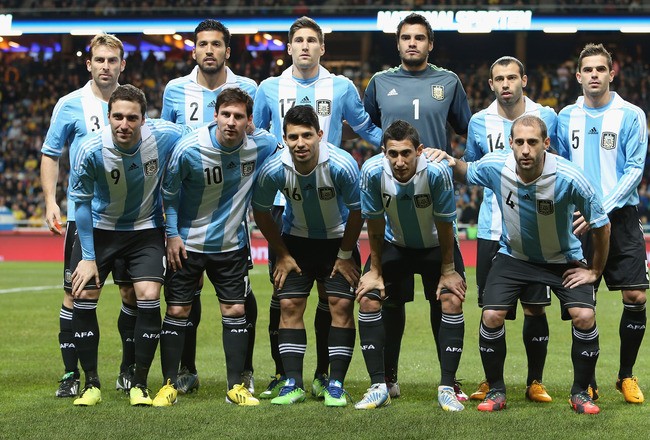 29th June, 1986 World Cup Final, Estadio Azteca, Mexico City: A capacity crowd over 115 thousand wait in bated breath as Diego Armando Maradona picks up a loose ball inside his own half. Four minutes remain for the final whistle of normal time in what has been a gem of a final. Argentina have thrown away their two goal advantage and the Germans in their indomitable never say die attitude somehow manage to restore parity from two corners in quick succession. An excerpt from Maradona’s Autobiography reads, “The Germans keep going after their death certificates have been issued.”

Argentina’s number ten lifts his head and the 26 year old who was anonymous for most of the match, puts in a delightful through ball with one moment of sheer brilliance. Jorge Burruchaga races past his marker and slots past the onrushing goalkeeper Herald Schumacher to slot home. The Albiceleste are crowned World Champions, twice in eight years, a feat that overshadowed political turmoil, poverty and sheer hooliganism in the footballing country.

Fast forward twenty years in Deutschland at the Gottlieb-Daimler-Stadion, better known as Mercedes Benz Arena, Esteban Cambiasso misses his penalty form the spot in the shootout as the Germans progress through to the semis. Four years further, Joachim Loew’s side ruthless dispatched Diego Maradona’s by a 4-0 scoreline in the quarter finals yet again, this time in South Africa. However, a week till the 2014 World Cup gets underway in Brazil, Alejandro Sabella’s side enter the showpiece event as major contenders. The Albiceleste have the mix of youthful exuberance, world class talent and the best player of the planet in their armour to lift the coveted trophy at the Marcana on July, the 13th.

Coach’s philosophy and Qualifying Campaign: The 59 year old Alejandro Sabella, former manager of Estudiantes de La Plata, took over the reins of the national team from Sergio Batista after a poor show in the 2011 Coppa America where the hosts were beaten by arch rivals and eventual winners Uruguay in a penalty shootout in the quarter finals. Sabella prefers a crude 4-3-3 setup which is built around captain Lionel Messi as the star of the show. The plucky manager has also experimented with a 4-4-2 and a 3-5-2 setup if needed during adverse situations. Argentina’s qualifying campaign was a bit strange from the very beginning, Sabella’s side cruised to victories over Chile, Colombia and Uruguay while they were on the wrong end of the scoreline against Bolivia and Venezuela apart from the inexplicable draw against Peru.

Explaining the Tevez conundrum: Argentina have always been a country who have been deeply rooted in their own footballing traditions. 30 year old Carlos Tevez who has enjoyed a stunning season( 20 goals and 8 assists) for Serie A champions Juventus was left out to accommodate Messi in the squad. Sergio Batista had tried to accommodate Messi, Aguero, Di Maria behind Higuain in a 4-2-3-1 system which failed inexplicably while the 4-3-3 setup with Messi, Lavezzi and Tevez as the attacking triumvirate didn’t suit the team’s overall shape off the ball. Tevez, who many seemed to prefer to Messi, thanks to his deeply rooted home traditions than the Barcelona forward, who had left the country aged 11.

A wonderful excerpt in this article perhaps sums up why Tevez was ignored.

“Before the 0-0 draw against Colombia in Santa Fe, Messi’s home province, for instance, the match announcer reading out the teams described Messi as “the best player in the world” and Tevez as “the player of the people”: the respective roars from the crowd showed who they preferred. That meant any coach leaving out Tevez faced a huge backlash if things went wrong. He became, effectively, undroppable. But how do you fit Messi, Tevez and Aguero into the same side? Perhaps at club level, if they could work on their mutual understanding every day, it would be possible but at national level, where the lack of time available to coaches means tactics have to be relatively simple, it isn’t”.

Tactical Blueprint: Argentina have the oldest squad going into the World Cup and there major concerns for Sabella at the back. First choice goalkeeper Sergio Romero has hardly played this season for Nouveau Riche French side AS Monaco while 30 year old Mariano Andujar has had a decent campaign with Serie A outfit Catania. Aregentina’s defense which is considered the weakest link of the squad boasts the likes of Benfica’s Ezequiel Garay who will partner Napoli’s Federico Fernandez or Manchester City’s Martin Demichelis in the heart of the defense. Liverpool target Marcos Rojo is the first choice left back while Manchester City’s Pablo Zabaleta is perhaps the best defender at the back filling in the right wing back role. Javier Maschrano almost acts as a modern day auxiliary libero, the quarterback role which pundits have coined recently. 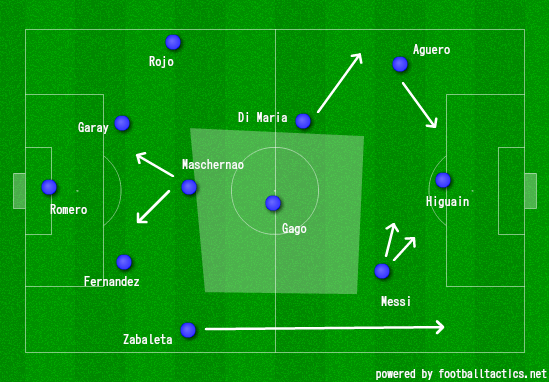 Fernando Gago remains the most important player for the side while Real Madrid’s Angel Di Maria, who had a brilliant season with the Champions League winners plays as a carrilero, a term used in Argentina for a player who shuttles up and down the wings exploiting the space on the wings while the advanced forward tries to cut inside, in this Aguero.

Napoli hitman Gonzalo Higuain will the major target man while Messi will be given a free role, playing as a false nine, perhaps no better player can maneuver space for his team mates and drag defenders out of position like the four times Ballon D’Or winner.

Transition between possession and attack: Argentina are expected to have a lion share of the possession in their matches and as the International friendly in February last year suggested, Sabella’s side have the technical acumen to beat any side on their day. To take a deeper look into their attacking prowess, the followings snaps show why Gago remains the most important player of the squad. The Valencia midfielder who is on loan from Valencia to the iconic Boca Juniors outfit will be the lynchpin around whom Messi and co will weave their magical wands. 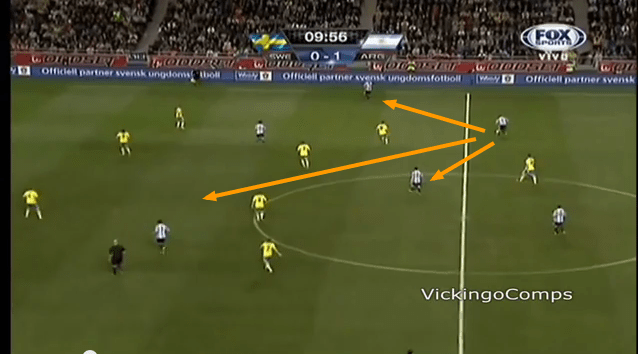 The above snap shows that Sweden are well disciplined with Gago on the ball. With Argentina’s forwards playing between the lines they don’t have the space to lose their markers once and for all. The best option for Gago would be a pass to the overlapping Zabaleta whose immense work rate will be a driving source for crosses from the right flank. 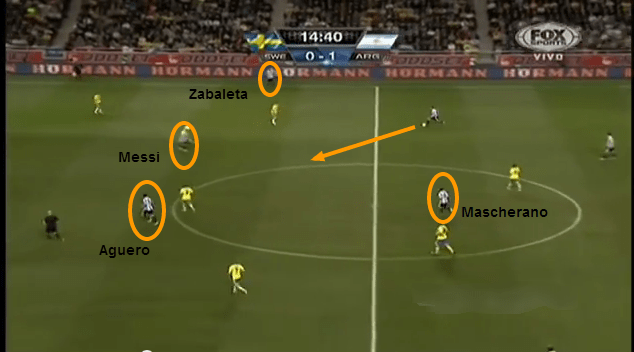 As Messi runs just off the shoulders of his marker and Aguero drifts into space, Gago has lots of time on the ball. The 28 year old drives into a more central position and with Higuain engaging the two centre backs  (not shown), Gago has both time and space to deliver the killer ball to initiate a swift move from a deep position. 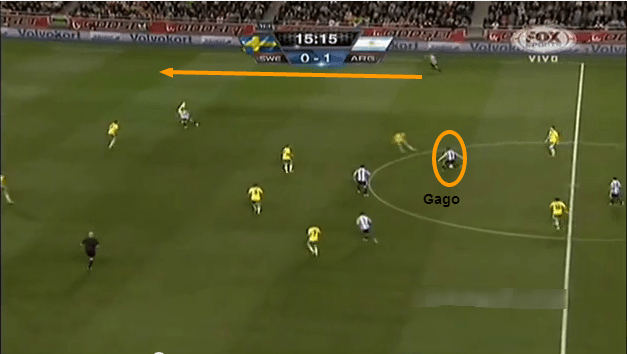 The former Real Madrid man will try to dictate the tempo of his side and his work rate will be instrumental to Argentina’s fortunes in Brazil. Gago is more of a regista, a deep-lying playmaker for the team works in tandem thanks to Mascherano’s destructive role. The Barcelona player has played the majority of the season as a makeshift centre back will relieve Gago of his tackling and defensive duties. Xabi Alonso has revolutionized the role playing at Liverpool and Real Madrid while Andrea Pirlo of Juventus perhaps remains the epitome of the modern day deep lying trequaristra. 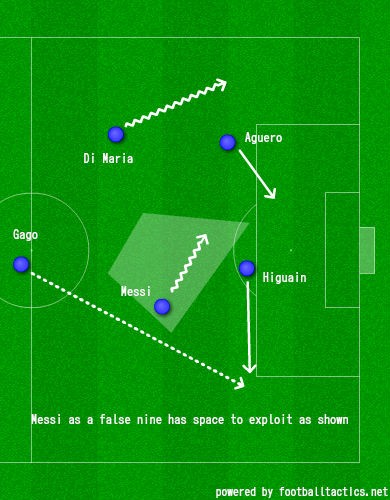 Gago will also look to serve Higuain with his cutting edge incisive over the top of the defense and as the Napoli man drifts wide, taking one of the centre back with him, its gives times to Messi and Aguero to cut inside, the fomer now acts as a false nine while Aguero remains narrow till Di Maria overlaps the Manchester City striker. This is where Di Maria’s evolution this season for Real has been ten folds.

The former Benfica man has excelled as a shuttler in the 4-3-3 as he has lesser burden to carry, and more space to exploit. He will not have a full-back high at his heels now, he can be more calm and is in general not involved in those key-pass-making-moments like a cross from the flanks or a cut-back.

Weakness: Argentina’s biggest test would be how they quickly negate incessant attacks on their fragile defense as the tournament withers on. Federico Fernandez is not the ideal player on whom a lot can be expected. The Napoli man is strong in the air but commits himself into unnecessary tackles which leaves space for the opposition to exploit. This needs Garay getting dragged out of position as he has to quickly come out off his zone to clear away the danger. Moreover the lack of depth in the squad is alarming. There is no player who fits in like Gago’s style of play while Ezequiel Lavezzi is perhaps not suited to Sabella’s more pragmatic approach, rather than relying on quick counter attacks.

Verdict: the Albiceleste are on paper, the most dangerous side going into the tournament but as history as Maradona’s autobiography suggests, are they prepared to suffer for a common collective good? Can Lionel Messi finally weigh his name against Maradona? 28 years later, can Messi and co take back the trophy to Buernos Aires? Time, as they say is the best answer.