Before I start, I promise, I will keep this as short as possible. The reason being, it is getting damn boring, tiresome and useless repetition. You know what I’m talking about. Yep. Angel di Maria.

Enough of transfer background. We have repeated it so many times over the past one month that feels like doing copy-paste every time we cover a story on him. Anyway, five major newspapers in Spain have covered the Angel di Maria saga today. All based on a common story, which I will share now, but with a different epilogue to it. Let’s enjoy.

The common story: Super agent Jorge Mendes is a demi-god for players. He is masterminding a deal to take Di Maria away from Real Madrid, because following the arrival of James Rodriguez, the Argentine is simply not needed at the club. Even the player doesn’t want to stay as well. 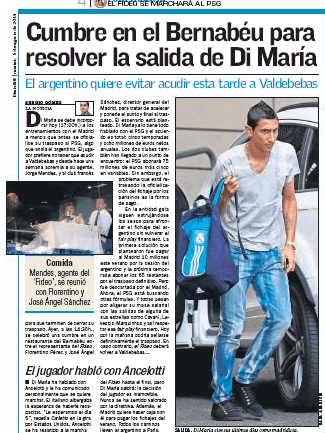 Mendes was spotted yesterday having a discussion with Real Madrid officials. It doesn’t need any scientific brain to understand they must have discussed about Di Maria among other issues.

Now, we will see, how all the newspapers have covered it. First, Madrid based newspapers – AS, Marca and El Confidencial (who have a close tie with the European champions).

El Con – They say the deal is close with PSG and it should go through any time soon. Negotiations have started, Di Maria have spoken with the French club but so far nothing is formal yet.

AS: They claim that PSG are studying alternative modes of payment, which will likely involve having to sell an asset, may be Cavani or Lavezzi. Simply because, they cannot pay €75m-80m at one go.

Marca: Everything is done between clubs and player, the only thing left is agreement on form of payment. So the deal isn’t official yet and Di Maria is required to attend the training sessions today.

Now, take a look at the stance from the Catalan based newspapers.

Mundo Deportivo: The deal is almost as good as done. Di Maria doesn’t want to join the practice and that “the deal should go through within hours”. 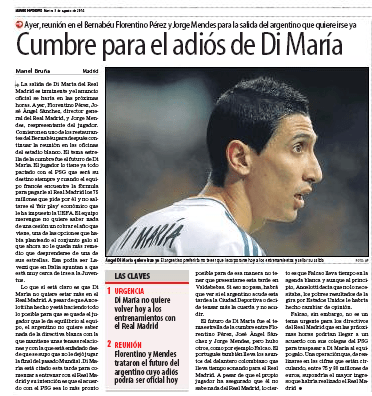 Sport: They however have presented their story in the mould of AS, saying PSG need to sell some of their stars in order to arrange this gigantic fee. They would be looking to sell Cavani or Lavezzi to balance the book. 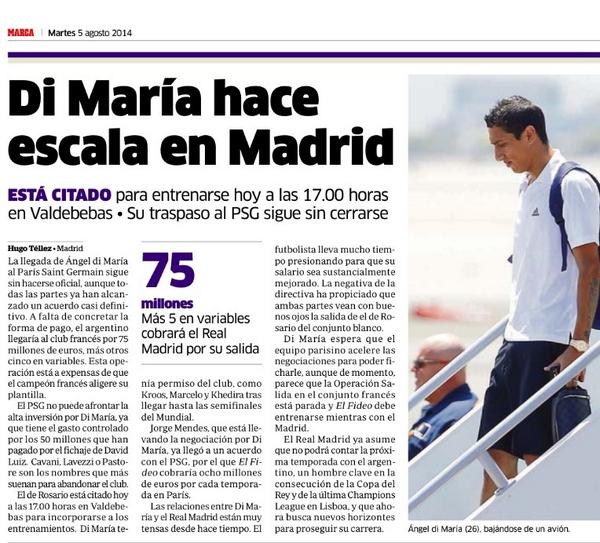 So, basically there is hardly any progress. We all know this, don’t we? The interesting part is, with every passing day, we are getting a feel that Di Maria is no more a target of Manchester United. No way United will pay such ridiculous figure on one single player and therefore it is left with PSG and Madrid to conclude a deal among themselves.