Besides a slight own-goal hiccup and a draw against Mexico, hosts Brazil have been in top form at the 2014 FIFA World Cup, getting the results, impressing the supporters and booking their place into the next round of the competition as group winners. Admittedly, the Brazil we see in 2014 isn’t quite as smooth as we have been accustomed to in the past, but there have been glimpses of that popular Samba approach to football.

Brazil now have an all South American encounter with Chile in the Round of 16, the same team they convincingly knocked out four years prior at the very same stage. A win there will set-up another all-South American clash in the quarters meaning that four South American teams are all vying for just one semi-final berth.

There is no Ronaldo, no Ronaldinho, no Kaka, in fact one would have to go way back to remember a time when Brazil had so few household names at a World Cup. Hopes are resting on a certain 22-year-old, but he isn’t the only one to ensure a Brazilian success on home soil after that fateful day in 1950. These are the key men whose form will be crucial for the South American giants.

The dependence on Neymar

Fred & Jo aren’t players that inspire confidence for any side at any level, let alone the World Cup (not anymore atleast), so the onus in attack has fallen upon the aforementioned 22-yr-old sensation, Neymar.

After opening the World Cup with a brace against Croatia and closing the host’s group stage run with another two goals, Neymar has somehow managed to silence the doubters and handle the pressures that comes with being the focus of a nation at a World Cup, more important of a host nation and at a much difficult level, of Brazil. But the Barcelona man has held his own extremely well with calm and composed performances as he leads the way in the Golden Boot race.

Positioned on the left side of attack, Neymar has the role of not only creating for his lone striker but getting into the box with his own attacking contribution. The dependence is such on Neymar that we’ll constantly see the talent dropping into deeper positions to further influence play. The fact that he also needs to manage the wide areas coupled with his tendency to naturally move central, the pressure on Neymar is immense. Although he’s managed to handle it thus far, one has to wonder what toll it can take on young shoulders for potentially four more clashes.

To ensure Brazil’s success, above all, Neymar needs to be in top form with his shooting boots on and his energy levels at maximum. It’s the sort of tournament players like this go from quality footballers, to cult figures.

The balance of Luiz Gustavo

Ask any Brazilian supporter and they’ll show their frustration at the positive feedback Luiz Gustavo has been getting this World Cup; not because he doesn’t deserve it but because people are only beginning to realise his talent now. Any Selecao follower will tell you how crucial the Wolfsburg man has been for the national team over the course of the past one year and beyond. 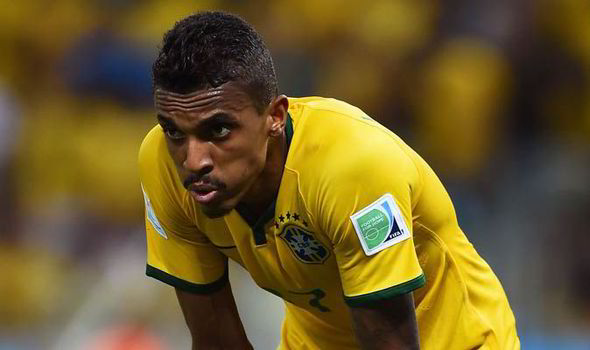 Being deployed in the heart of Brazil’s midfield. Luiz Gustavo has retained his spot in the starting eleven due to the balance he provides in midfield. His work rate makes him an important cog in the defensive wheel, his eye for a pass helps the likes of Neymar ensure their attacking success, while he also bears an uncanny ability to offer himself as an attacking option (though this isn’t his biggest contribution). He has averaged over 90% pass completion in all the three games thus far, and further impressive with atleast 4 interceptions or more in those group stage fixtures (according to Opta stats provided by WhoScored.com)

You may not notice his importance as much of his work is not quite as spectacular as some of the other Brazilians we’ve come to know, but his influence on the side remains vital. He’s an important component of the Brazilian team, watching him for 90 minutes will tell you exactly why.

Prior to the commencement of the tournament, my personal prediction was that we’ll see Thiago Silva as a potential candidate for the 2014 Golden Ball Award, a bit naive I must admit given FIFA’s poor track record of recognising defenders. But the captain of the side has as crucial a role as the young star, Neymar, in the opposite third. 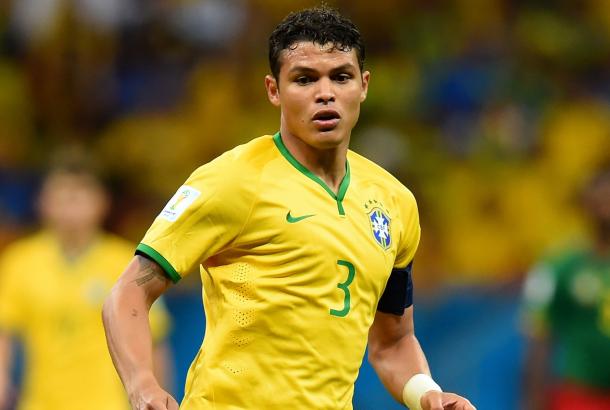 Thiago Silva is just the type of passionate leader a World Cup side requires, but his importance is much more than just philosophical. Comfortable playing as the ball-playing defender so hard to dislike, Thiago Silva (alongwith David Luiz) has a crucial role in ensuring his goalkeeper is well protected. Brazilian systems favour having fluid midfielders but often leave their defence short, that problem has been solved by Luiz Gustavo but Thiago Silva too has a crucial role in organising his defence. He needs to ensure the full-backs, Marcelo & Dani Alves are on hand to get back into a defensive position as they tend to possess an attacking mentality, while David Luiz has a tendency of going forward and leaving his defence exposed.

Central defenders in the past have inspired their sides to glory at this level, this is Thiago Silva’s chance for a Beckenbaeur moment, or in a more recent sense, a chance to emulate Fabio Cannavao.

Though Brazilian teams in the past have been known for their team chemistry, their individual performers cannot be overlooked. Neymar, Gustavo & Silva are thus the three key men for the Selecao.