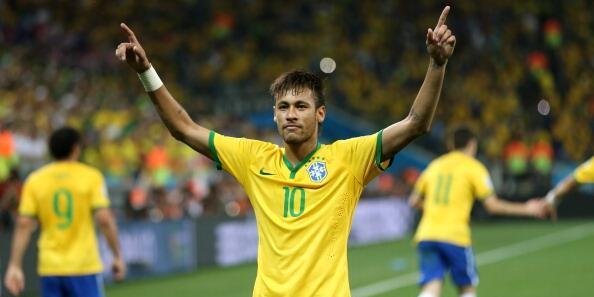 The opening game of the World Cup is always closely anticipated, with all eyes on the host nation, the pressure is immense. As Brazil walked out to a roar at Sao Paulo, they looked determined, seemingly not unfazed by the situation, and if there was any question of their passion, it was put to bed with their national anthem that left viewers in awe, and opposition captain Darijo Srna with nothing else than a chuckle.

Ofcourse the pressure was on Brazil, in particular their young sensation on whom the hopes of a nation, generations and supporters worldwide rest. Neymar is the man they all are looking to guide Brazil to what would be an unprecedented 6th World Cup trophy. Surely, this will be too much for a 22-yr-old, no matter who that maybe.

Croatia on the other hand are a side who’d come into the tournament expecting to progress past the group stage but came into the opener with much lesser pressure than the opposition and nothing to lose, as captain Srna put it.

The stage was set, the script was written, it was Brazil’s to win. It ended as it was supposed to, but that original script certainly seemed flawed with the means to the obvious end not quite that simple. Brazil did win 3-1, after a not so simple game, with Neymar scoring a brace, he does feature as one of the key players. And while all the headlines has gone his way, there was another man more key in that result.

Oscar, the maestro in midfield

I’ll admittedly say having watched Oscar in the Premier League and to a much lesser degree in Brazil earlier before his move to Chelsea, I didn’t think much of his ability. He did alright, but you always got the sense there was something lacking, that the Oscar who turned out for Internacional in Brazil just never quite did for Chelsea in England. Well on Brazilian soil again, Oscar put in a shift worthy of a World Cup, and more importantly, worthy of Brazil at a World Cup.

While we will speak about Oscar’s attacking prowess, it was his defensive work-rate that really caught the eye. He’s often looked upon as the swift, smooth Brazilian midfielder we’ve come to see over the years. But against Croatia, he showed why he isn’t worried about doing the dirty work. He’s willing to get stuck in there and win the ball back. Every Brazilian attacking midfielder is thought to retain possession, Oscar yesterday showed how they are more than capable of regaining possession as well. This was evident for the first Brazilian goal, it seemed like he had lost the ball, but determined to keep it, took a few challenges, emerged with it and let Neymar do the rest. It’s that sort of midfielder any side would benefit from having in their attack. Defending and pressing from the front, a vital asset.

In an attacking sense, Oscar played out wide at the start, a somewhat unfamiliar role. But the Chelsea man was incredible in that position in the first half, establishing himself as the best player on the pitch. Two wonderful crosses still fresh in my memory, and i’m left to ponder why they didn’t find the back of the net. All they needed was a slight touch and it was win. Oscar thrived out wide, helped by the fact that Sime Vrsaljko was playing as a make-shift left back (he’s usually on the right) after Pranjic sustained an injury against Australia, the temporary change was too much for the Genoa man to handle.

His goal was obviously well taken as well, though the keeper could have done better. Win possession, get the ball back, and make runs into the box. A remarkable performance, arguably the best we’ve seen of his in a Brazilian shirt.

Neymar, the man they look for goals and creativity; a bit too much?

As we know, Brazil’s hopes are resting on this young man’s shoulders, and understandably so. When you make your name in the domestic Brazilian league, and earn a big money move to one of the biggest clubs in the World, you’re bound to develop expectations and attract pressure.

Having said that, the dependence that Brazil have on Neymar is on the brink of being just a tad bit too excessive. Yes they can look to him for goals, but with Oscar deployed wide against Croatia, and Neymar in a more central role, the Barcelona striker was seen playing more deep in midfield than around the box. The Brazilian midfield of Gustavo & Paulinho did nothing in terms of creativity, leaving the ex-Santos talent with all to do.

Neymar dropped deep to get the ball rolling, skipping challenges and coming alive around the box, but the influence he has on the side was evident. Influence from which more pressure stems. He scored two, and became the first since David Villa to score a brace on his World Cup debut, but if Brazil are to win the World Cup, they need to ensure Neymar isn’t the only man for goals and creativity. Oscar stepped it up, but the likes of Hulk & Fred had quiet games, as did the midfielders.

The toll of guiding a nation through will be immense, something Neymar will feel in the latter stages of the tournament. He may be world-class, but Brazil need to look beyond him.

Temporary shift out left, Olic puts in a solid shift

For those that have followed Olic’s career, you’ll know the sort of player he is. You give him a task, no matter what, he’ll do it. A work-horse in the side, he’s always determined and never loses energy with a willingness to always give it all to his side.

With Mandzukic suspended, Jelavic came into the Croatian side with Perisic being shifted to the right-hand side. It meant that Olic would play in a rather unfamiliar left-sided role. One that he, to my personal surprise, did extremely well. Olic isn’t the type who can be shifted as an inverted winger and still put in a good shift, but again I may be guilty of over-looking his first quality we spoke about.

With Dani Alves’ insistence on moving forward, this left gaps in an already questionable Brazilian defensive line. Olic found himself, time and again, in behind the full-back and in acres of space to collect the ball. This space tempted him to get more narrow, getting into the box often, reminiscing his usual striker’s role.

The space, more importantly, allowed Olic to whip crosses into the box, most of which were perfect and were begging for a head, while one that finally came off was possibly mis-hit. His cross led to the opener of the 2014 FIFA World Cup, his influence immense. But Scolari’s men, as they will do throughout the tournament, were able to shut-out the opposition and any possible threat that may arise.

Special mention: to Croatia’s Luka Modric who struggled a bit in the first half, but settled in to the role we’ll see him play throughout the World Cup.

Oscar & Neymar will probably be the main men to guide Brazil with me personally having my doubts about Fred, Hulk and the midfield (for creativity), but the pressure certainly needs to ease off from Neymar. Can’t help but mention Lucas Moura again, and the influence he could have had on the side.

Croatia, I have no doubt, will progress past the group stage. Obviously this loss means they won’t finish top, but I’m confident they’ll end up with six points. The system they play begs for Manduzkic, something that Jelavic isn’t, and you can expect the Bayern man to get a couple of goals against Cameroon & Mexico.