Arsenal transferred Alexis Sánchez from Barcelona 2 seasons ago, in hopes to fill the offensive void left by Robin van Persie. In his third season at the club, Sánchez seems to have finally arrived. While he had respectable seasons the past two years, he has reached new heights in this early season. Sánchez is two goals away from matching his goal tally from last year and 5 away from matching his tally from the season prior.

Last season, Sánchez earned 13.18 points for Arsenal. This season, he has already earned 10.20 points and is on pace to earn nearly 28 points for his side in the Most Valuable Offensive Player (MVOP) rankings. It is evident that he is clicking. The question is: will Arsenal be clicking till the end? 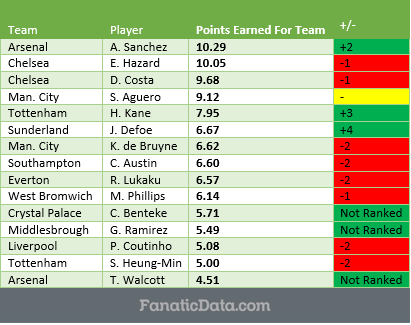 Let’s not forget to talk about the other players that are making the MVOP rankings particularly interesting this season. In the 7 MVOP ranking updates we have listed this season, there has been a change at the top every ranking. Alexis Sánchez became the second player this season, after Eden Hazard, to reach the top more than once. Last season, Jamie Vardy never relinquished the top spot after Matchday 4.

It doesn’t seem like the competition for the top will let up any time soon. Mathematically, every single player in the ranking has a chance to grab the top spot by the time we release our new rankings after Matchday 16.

Utilizing the most commonly used formation in the Premier League, 4-2-3-1, we determined the most valuable starting squad through Matchday 14 (excluding goalies). 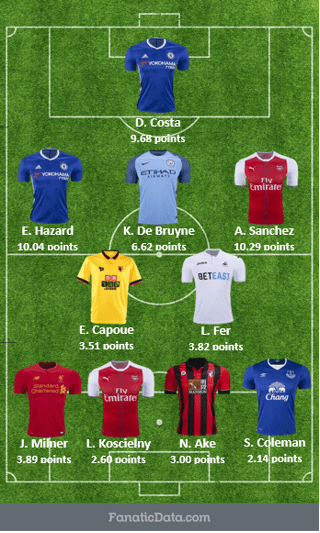 There weren’t too many changes to the Most Valuable Starting Squad. Swansea City’s Leroy Fer made a reappearance in the squad, at the expense of Paul Pogba. Bournemouth’s Nathan Aké made his debut in the starting squad after scoring the dramatic winning goal against Liverpool this past matchday.

See the latest rankings and starting squad after Matchday 16.