Paris Saint Germain are actively considering the option of selling midfielder Adrien Rabiot after the club has failed to convince the youngster to sign a new contract in their latest meeting with the player’s entourage.

The news would boost Arsenal and Chelsea, the two Premier League clubs thought to be heavily interested in the 19-year-old. Arsenal had sent scouts to track his progress regularly last season, which The Guardian also claimed that Chelsea were looking to tempt the young Frenchman with a huge pay-rise. 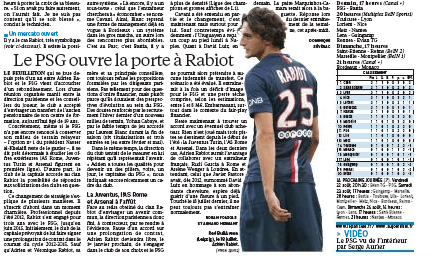 PSG have made several attempts to keep him at the club but the youngster is unwilling to sign a new contract. His current contract expires in 2015, which means he will become a free transfer next season or can sign a pre-contract with a foreign club in January.

The French champions probably would not take the risk of selling him for free. With FFP regulations hanging on their shoulders like Albatross, selling him for nothing would be catastrophe for their economy.

French newspaper Le Parisien claim that PSG president Nasser al-Khelaifi is now looking at the possibility of cash in on the player. Arsenal, Juventus and Roma are thought to be the interested parties at the moment.

All PSG now need is to come to an agreement with any potential buyer and would be willing to do business for a paltry fee of around €5-8m.