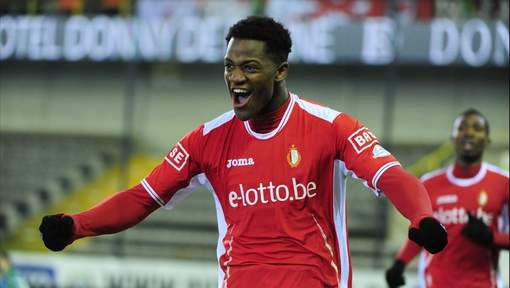 Standard Liege goal machine Michy Batshuayi has hinted of his desire to experience Premier League football, stating that Arsenal are his preferred destination.

The Belgian striker has netted 18 times this season in 29 league matches and is attracting interest from top clubs all around the world.

According to reports, the striker, who is the top scorer of Jupiter Pro League this season and has a contract till 2018, is expecting to move to new pastures next season.

“Unfortunately I do not think I’ll stay (at Standard past the summer),” said Batshuayi, speaking on Belgian TV to La Tribune.

“Many things can happen but I am someone who has ambitions. I want to progress as quickly as possible. I’ll make a choice with my agents and my family. I must consider my choices carefully.”

“Personally, I like Arsenal. There is a good philosophy at the club, where trust is given to young players.

“This is a very technical team playing good football, and since I was little this was a team who I liked. I’ve loved the club from childhood.”

The Gunners need to bolster their striking department next season and will need at least one or two top forwards in the summer.

While, Arsene Wenger will be trying his best to lure top names like Diego Costa or say Jackson Martinez, but the Frenchman may also take a gamble with youngsters like Batshuayi, who could cost within €10m.