Tottenham Hotspur are close to completing a striker signing after Lyon’s Clinton Njié confirmed on Instagram that he will join the Premier League club in the summer transfer window.

The 21-year-old has been heavily linked with a move to the North London club in the ongoing window as they look to bolster their attacking options. Roberto Soldado is on the verge of sealing a move to Villarreal, while Emmanuel Adebayor has urged to find a new club.

With Soldado and the former Arsenal and Manchester City striker set for summer exit, Tottenham will only be with Harry Kane as the recognised striker in the squad. Njié will be the latest addition to join the England international at White Hart Lane.

“I want to thank all the Lyon staff, president and all the fans and my teammates,” he wrote alongside a picture of himself celebrating a goal in Ligue 1. “And I also thank you for your messages of support . New chapter now. #Tottenham#Spurs,” Njié posted on his official Instagram account. 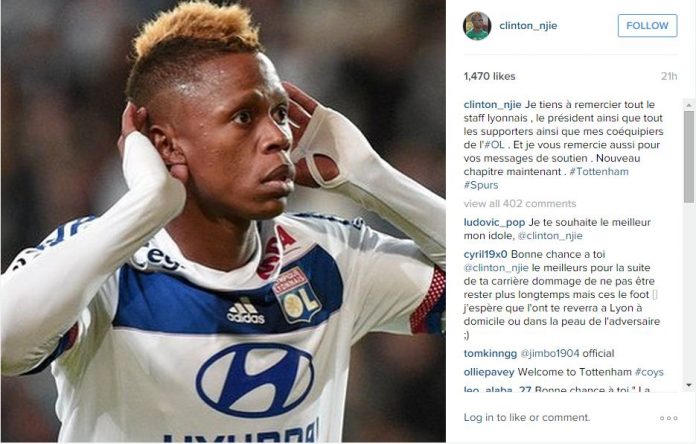 According to The Telegraph, Tottenham are paying £12m for the Cameroon international, which is an offer too hard to turn down for Lyon. Their manager Hubert Fournier revealed the English club’s offer was tempting, which forced them to let Njié join them.

” “It is well-advanced. There sums that are involved are considerable for a young player like Clinton. It is a mixture of satisfaction and disappointment to lose a player who still has significant room for growth,” he said.

“Ideally, one would like to always keep our good players. But we must adapt. There is an economic reality that affects 19 clubs in France, there is only one who does not have these problems.”