Football’s Believe it or not 2: 10 funny and strange football stories 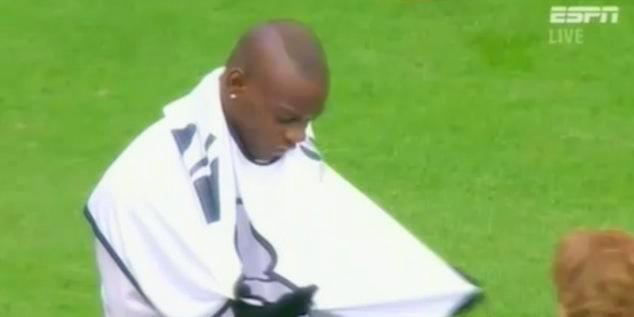 Following up on the earlier article – Football’s Believe it or not – I have compiled more of the most bizarre, strange and funny stories from the world of football.

Jose Manuel Barro Escandon went a little bit card crazy in a match involving first division teams Recreativo Linense and Saladillo de Algeciras. The match descended into a massive brawl which forced the referee to abandon the game before going into each dressing room and showing nine red cards per team.

A dose of his own medicine

During the 1930 World Cup semifinal between Argentina and the United States, the American trainer sprinted onto the pitch to argue with the referee. In the process he threw his medical bag to the ground, opened a bottle of chloroform and then collapsed to the ground as he’d knocked himself out.

Norman Windram, a lifelong Manchester United fan, claimed in 2002 to have been at every Manchester United match at Old Trafford since 1926. He said he watched his first game aged four-years-old and attended over 1,800 home matches in a row making him one of the loyalist supporters the club has ever had.

The Chile Under-20 squad were fined in 2002 for laughing. The country’s FA decided to punish the players as someone told a joke which caused the whole squad to fall about laughing. The coach complained as he struggled to regain authority and control after the joke had been told.

Grimsby Town manager Brian Laws is alleged to have thrown a plate of chicken wings at Ivano Bonetti in 1996 after the team had lost a match. The gaffer was apparently unhappy with Bonetti’s lack of effort throughout the game and hurled the chicken at the player through his frustration.

Sepp Blatter, the head of FIFA, didn’t exactly cover himself in glory when he was answering questions about the women’s game in 2004. He suggested a way to make the women’s game more popular would be to bring in more feminine clothing such as much tighter shorts.

Newcastle United midfielder Clarence Acuna was pulled over by police after attending the club’s Christmas party in 1999. However, it was a caution with a difference because the Chilean was dressed as Captain Hook as the police asked him various questions related to his driving skills.

A trainer was sent off in 2005 when he answered his mobile phone in the middle of the pitch. Dave Nicholls was treating a player on the pitch when his phone started to ring in his pocket. Without thinking he naturally answered and an angry referee sent the trainer off which meant he was restricted from the dug out for the rest of the game.

Balotelli can be trusted with kids

Manchester City striker Mario Balotelli stormed into the office of a headmaster in 2011. A young fan asked Balotelli for an autograph at training which prompted the Italian to ask why he wasn’t at school. The fan explained he was being bullied which prompted Balotelli to go to the school with the boy and his mother and demand to see the headmaster to sort the incident out.

Ronnie Simpson of Celtic was hit on the head by a brick as he warmed up for a match against Racing Club of Argentina in 1967. As he went about his pre-match routine, a fan threw the brick in his direction. He was subsequently injured and couldn’t continue which meant he was replaced by reserve player John Fallon.

Read part one of the series: Football’s Believe it or not: 10 most bizarre but true stories.