With Tevez, Aguero and Balotelli staying, is there room at Manchester City for Edin Dzeko? 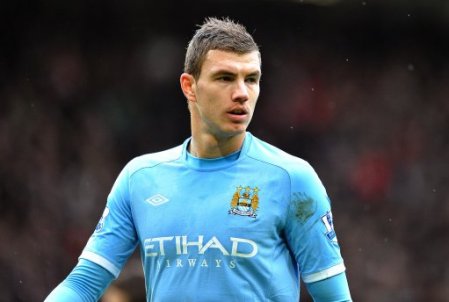 Manchester City have played some scintillating football over recent weeks to retake the top spot in the Premier League, with only 180 minutes between them and their first top-flight title since 1968. One of the reasons for this upturn is seemingly the return to the team of Carlos Tevez, and his relationship with countryman Sergio Aguero. However, with Mario Balotelli still in the picture also, what does the future hold for Edin Dzeko?

The Bosnian has had contrasting fortunes during his time at the Etihad Stadium. A slow goalscoring start after his £27 million move from Wolfsburg back in January 2011  saw the eastern European forward go without hitting the back of the net until late April, and had the club’s fans questioning his purchase. However, a blistering start to 2011-12 saw Dzeko leading the City line and scoring important goals to power the club into title contention. The 26-year-old bagged four goals in the 5-1 demolition of Tottenham at White Hart Lane, and scored twice against rivals Manchester United in the 6-1 derby rout at Old Trafford.

There is no doubt of Dzeko quality, if he is given a run of games and is in the right mindframe. Strong, mobile and good in the air, the Bosnian has proven that he can score goals in the Premier League. Roberto Mancini will want four strikers at his disposal, and Dzeko would certainly provide an able deputy to the Argentinean pair and a man to throw on if your team is in search of a goal.

However, amongst a squad of big egos and personalities, Dzeko’s attitude, or lack of it, can go unnoticed. On a fateful night in Munich when Tevez refused to come off the Allianz Arena bench, Dzeko had started the game but cut a petulant and abusive figure when removed by Mancini in the second half – this was slipped under the carpet in light of Tevez’s misdemeanour.

On numerous other occasions this term Dzeko has made his frustrations clear, and he is clearly not a fan of the squad-rotation system. The Bosnian seems to need to be the main man, like he is at international level, to excel, and constantly being in and out of the team breeds frustration and inconsistency.

With Aguero, Tevez and Balotelli all stating that they want to stay with City over the last fortnight, it is evident that there is no room for Dzeko. Mancini would like to keep him, but will not play him enough to satisfy the player. Bayern Munich and Borussia Dormund have been credited with an interest, but City are set to make a considerable loss on their initial £27 million investment.

One feels that Dzeko has been a victim of City’s style and personnel, with Tevez, Aguero, David Silva and Samir Nasri all smaller players that want the ball to feet and to knit intricate interplay. The bullish Dzeko is seemingly not an ideal fit to the Premier League leaders, and will most likely be sold at a discount price by City this summer with the Financial Fair Play ruling in mind.