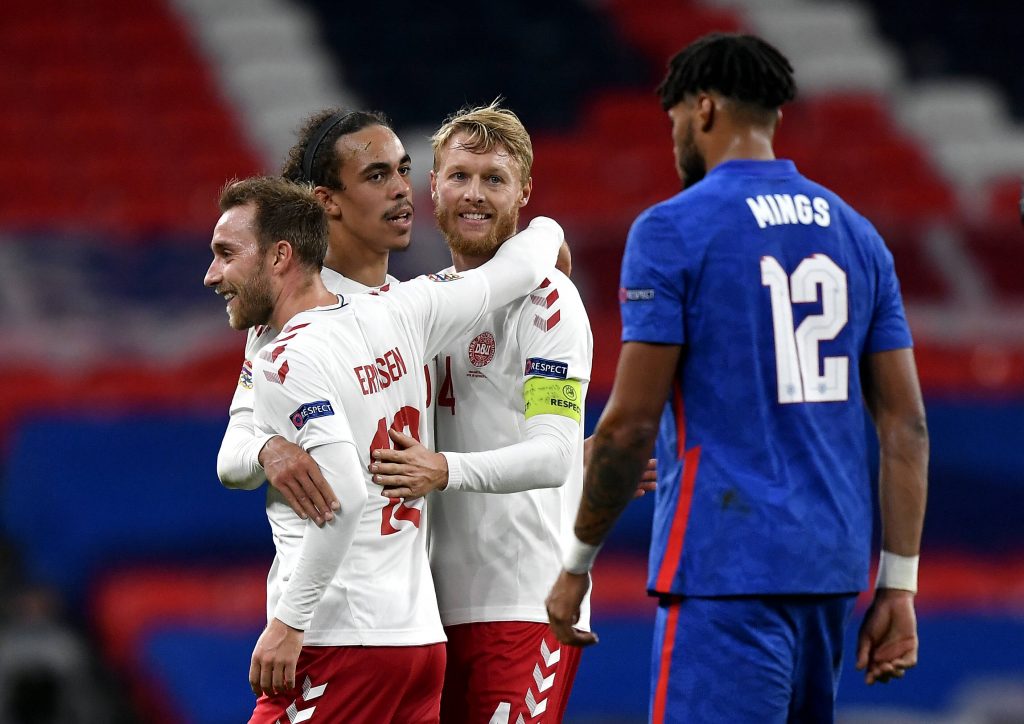 Many still remember the likes of Michael Laudrup, Jon Dahl Tomasson, Peter Schmeichel and Jesper Gronkjaer among some breathtaking talents Denmark had to offer.

The Scandinavian country has been and still remains a factory of talents.

From Simon Kjaer to Christian Eriksen, Denmark boast some of Europe’s most famous active footballers.

While they are betting outsiders for the upcoming Euro 2020 tournament, if you are going to bet on any team causing an upset during the Euros, you can bet on Denmark to be that team. Whether in the group stages or the knockout stage, the Danes will be a team to watch for the casual fans and bettors alike.

Without further ado, let’s take a look at the five best Danish players.

The Denmark captain has accrued 105 appearances for the national team since his debut in February 2009 under Morten Olsen.

Entrusted with the captain’s armband following Daniel Agger’s retirement in 2016, the experienced defender navigated his side to the 2018 FIFA World Cup round of 16.

Currently with AC Milan, Kjaer played in four of Europe’s top-five leagues, wearing the colours of Wolfsburg, Roma, Lille, Fenerbahce, Sevilla and Atalanta before signing for the Rossoneri in 2020.

A natural-born leader, the 32-year-old has earned a fair share of praise for knitting together Milan’s sloppy backline, playing a prominent role in helping the team restore some of their previous heights.

Hojbjerg began his senior career at Bayern Munich before moving to Southampton in 2016 in a deal worth £12.8 million.

While enjoying his rise to prominence at St Mary’s Stadium, the combative box-to-box midfielder has collected over 100 Premier League appearances.

Hojbjerg’s technical proficiency and tireless running earned him a £15m plus add-ons move to Tottenham last summer, where he has become one of Jose Mourinho’s key first-team fixtures.

Arguably one of the best players in Denmark’s modern history, Eriksen was one of the finest playmakers in the Premier League during his time at Tottenham.

Capped 106 times by his country, he has clocked up 36 goals and 23 assists en route to being named the Danish Football Player of the Year a record five times.

The 29-year-old is a definition of a modern-day attacking midfielder.

Pinpoint passing, accompanied by an unparalleled vision and impressive technical ability, make Eriksen one of the best in his position in Europe.

Despite experiencing a dip in form following his controversial move to Inter Milan in January 2020, the former Ajax man is getting his career back on track.

Every Bundesliga fan knows what Yussuf Poulsen can do when he feels his game.

The 26-year-old forward carried RB Leipzig to Bundesliga promotion in 2016 and has since established himself as one of the fiercest strikers in the German top-flight.

In May 2020, Poulsen became the first player in Leipzig history to smash a 250-appearance barrier.

He has made over 50 caps for Denmark and was part of the squad to reach the 2018 FIFA World Cup round of 16.

The 34-year-old veteran was an omnipresent figure for Ajax, helping the Lancers lift three Eredivisie titles between 2013 and 2019.

Although he has spent most of his professional career in the Netherlands, the midfielder had a brief spell in Serie A with Genoa before joining Heerenveen this winter.

Everyone who played Football Manager knows Shone is a set-piece specialist, but those who watched him at Ajax know his qualities extend far beyond that.

The Danish dynamo is a quick-thinking, technically blessed midfielder and a permanent threat from long range.

If only injuries had not crippled his progress, Shone would have grabbed more than 51 international caps.