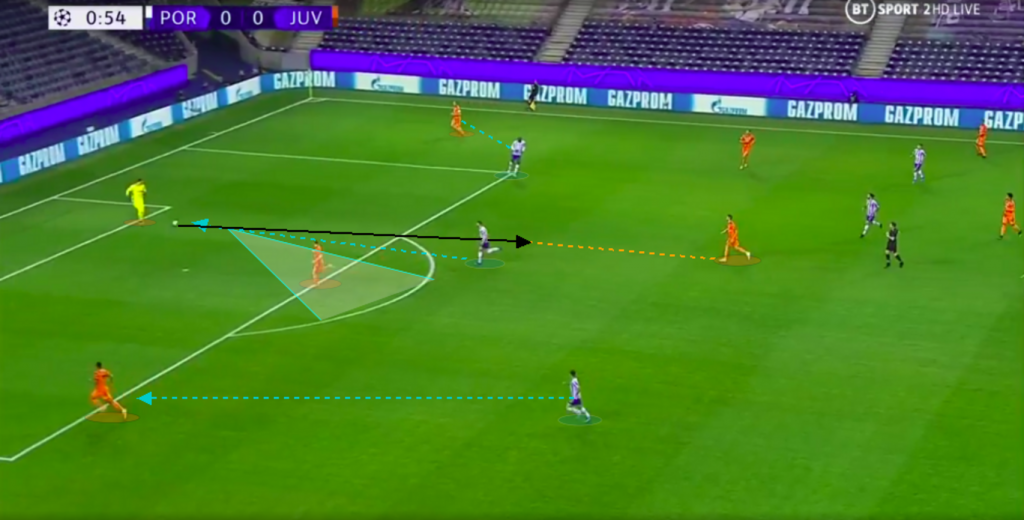 The UEFA Champions League round of 16 continued with some intriguing clashes, including the sixth meeting between Porto and Juventus.

The hosts had done well in the group stage as they lost just once, conceded in just one match and finishing three points behind Manchester City, but the knockout phase is different gravy altogether.

Juventus finished top of their group by getting past Barcelona on the last day, but their season has not gone to plan domestically.

The Champions League has eluded them very often in recent history, and they were keen to avoid a repeat of their round of 16 elimination from last season.

The Italian champions did not start well, though, and they have work to do in the second leg with a 2-1 deficit to overturn. In this analysis, we will attempt to break down how Porto pulled this important victory off. 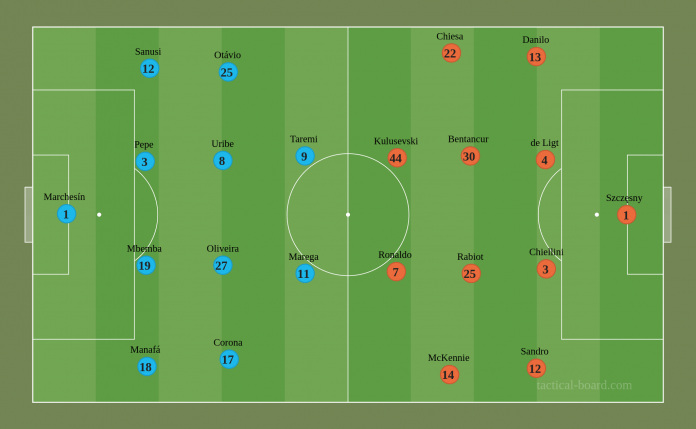 Porto lined up in their familiar 4-4-2, as Agustín Marchesín had a defence of Wilson Manafá, Chancel Mbemba, Pepe and Zaidu Sanusi in front of him. The midfield was comprised of Jesús Corona, Sérgio Oliveira, Mateus Uribe and Otávio, while Moussa Marega led the line alongside Mehdi Taremi.

Juventus fielded a 4-4-2 as well, as Wojciech Szczęsny got a start in goal. Danilo, Matthijs de Ligt, Giorgio Chellini and Alex Sandro made up the defence, with Rodrigo Bentancur and Adrien Rabiot in central midfield. Federico Chiesa and West McKennie were on either flank, and Dejan Kulusevski joined Cristiano Ronaldo at the sharp end.

As is evident from the fact that they had just over a third of possession, Porto found themselves chasing the ball quite often, but they did it very successfully. Let’s see how they pressed Juventus.

Just as they have been doing throughout this season, Juventus built up with a back-three. In this match, the right-back (Danilo) stayed back, while the left-back (Sandro) pushed forward.

Therefore, Porto’s first line of pressing involved their two strikers and the left midfielder – Otávio. The Juventus midfielders often came short, so Oliveira made sure to track them as well. 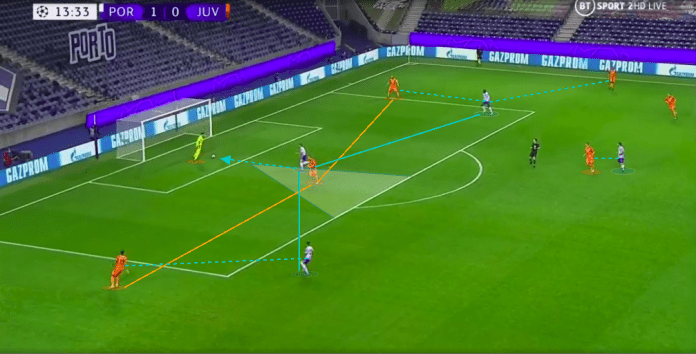 The trigger was the backpass to the keeper – Taremi pressed him while keeping de Ligt in his cover shadow, Marega stayed close to Chiellini while being prepared to chase any long balls towards Sandro, and Otávio pushed forward to mark Danilo. 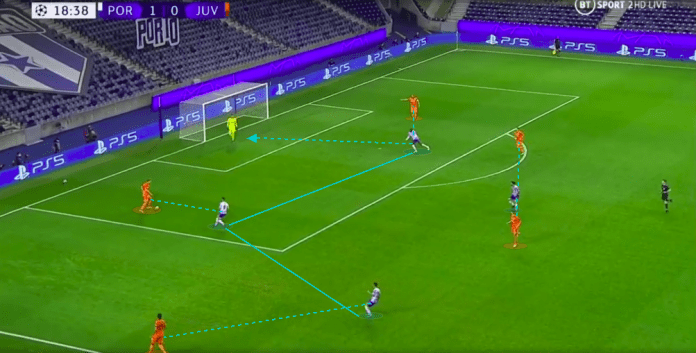 If the ball was played to de Ligt (who usually went to the keeper’s right), Taremi closed him down, with Marega preparing to close a return ball to the keeper down while keeping Chiellini close to him. Otávio and Oliveira’s roles remained unchanged.

Their early goal came as a result of some excellent pressing (and horrible passing on Juventus’ part) too. 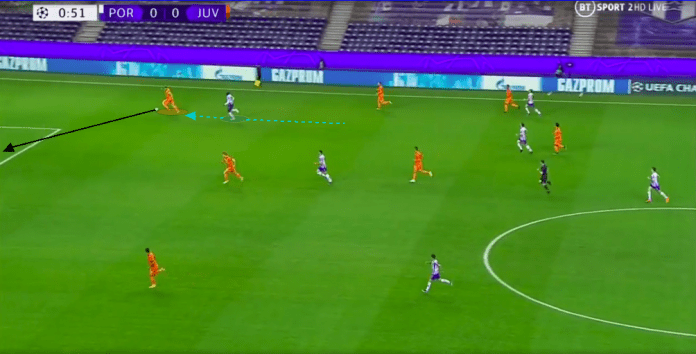 It all started with a ball played down the channel, with the situation easily controlled by a Juventus defender. Marega still gave chase, forcing Chiellini to go back to the keeper. 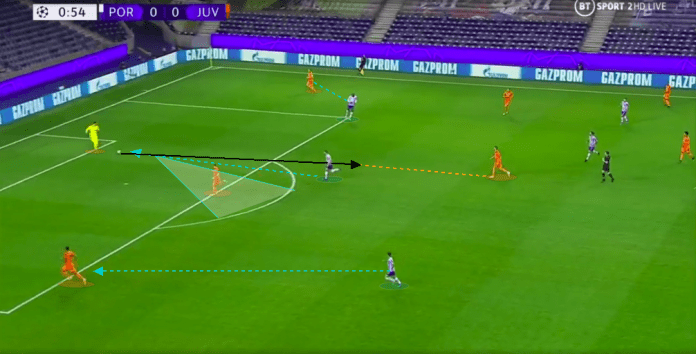 Taremi sprinted to quickly close him down while keeping de Ligt in his cover shadow, with Marega keeping Chiellini busy and Otávio preparing to press Danilo. Therefore, Bentancur had to come short to provide an additional passing option.

However, Oliveira tagged along with him, preventing him from getting away on the half-turn. Chiellini and de Ligt were still being marked and Danilo was not an option either, so Bentancur opted to go to Szczęsny, but he was not entirely free either with Taremi close to him. A loose pass was all that the Iranian international was looking for, and when he got one, he pounced to make it 1-0.

Now, let us look at how the hosts defended since they were stuck in their own halves for long spells in the game but held out resolutely.

Having not conceded for nearly eight hours of Champions League football going into this match, Porto’s defence is undoubtedly one of their greatest strengths. Bolstered by an early lead, here is how they defended: 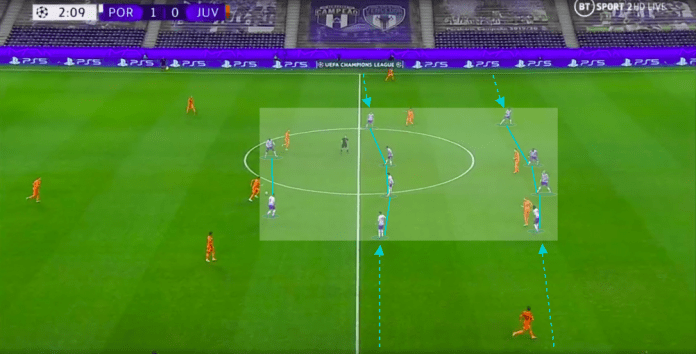 Porto maintained a very compact and narrow 4-4-2 in their own half, aiming to squeeze the centre of the pitch. 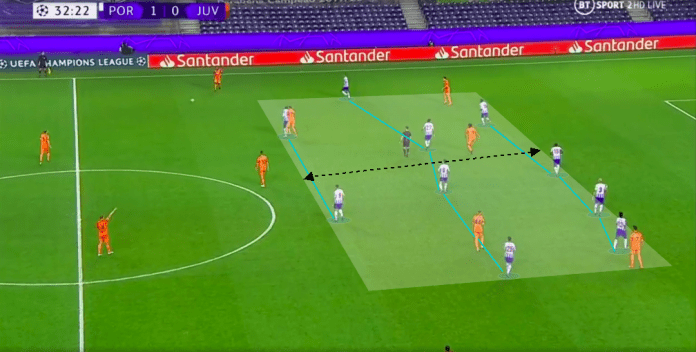 You can clearly see the vertical compactness of the Porto 4-4-2 here – the gap between the defence and attack is about 15 yards – so there is virtually no space between the lines for Juventus to exploit.

If their opponents moved the ball to one side, the wide midfielder would push forward to close the channel down. 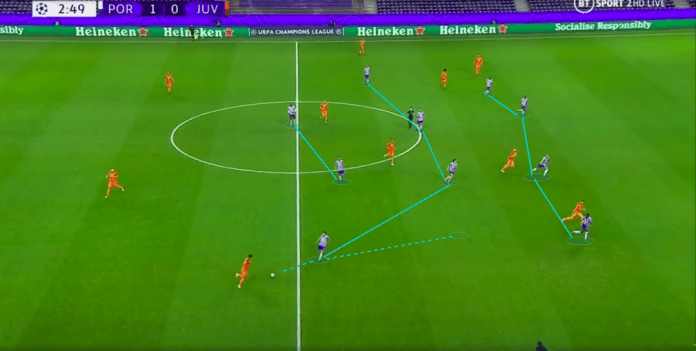 You can see Otávio doing just that here, as he is looking to block any passes down the channel for Danilo. Like the press, the Brazilan had to do it more often than his Mexican counterpart on the other wing due to the nature of Juventus’ back-three in possession, as it included the right-back while the left-back pushed forward.

While there is no question that Porto’s defence was very disciplined and well-drilled, they did get some help from Juventus’ poor attacking gameplan and execution.

After conceding within 62 seconds, Juventus had to chase the match from the get-go. However, their attacks lacked any invention and were quite monotonous. Let’s find out why.

Juventus transitioned into a 3-2-5 in attack, with Alex Sandro continuing to push forward as McKennie tucked inside. The two midfielders stayed where you would expect them to be, and the back-three from the build-up remained untouched too. As Porto congested the centre, there was naturally a lot of space on the wings, particularly on the left due to McKennie’s movement. 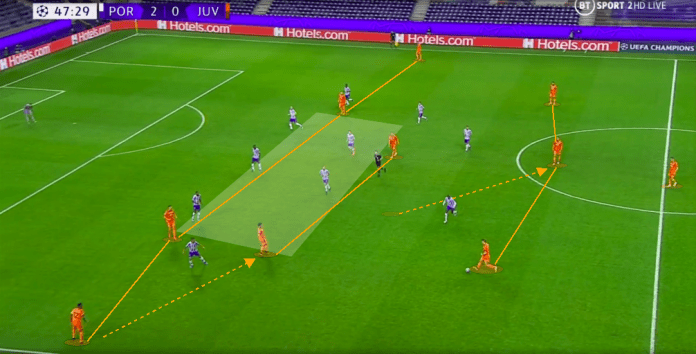 In cases where one midfielder stayed back after the build-up, the two wide men in the back-three moved to either of him and McKennie pushed into holding midfield alongside the other. Also, notice how Juventus are trying to overload the wide areas as much as possible while leaving the centre empty due to Porto’s compact shape. 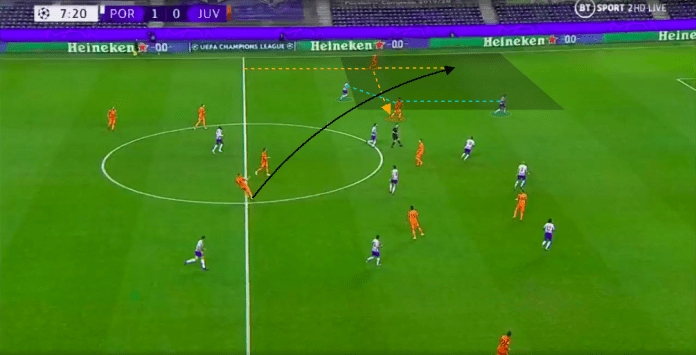 To use the space available on the wings, one of Juventus’ main attacking patterns involved a crossfield directed towards Sandro on the left, as McKennie tucked inside and pulled the Porto defenders with him. 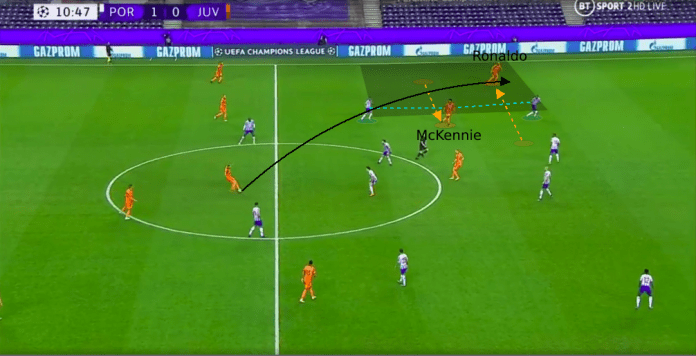 In other cases where Sandro had not advanced enough, Ronaldo moved into the space vacated by McKennie to receive such passes.

Unfortunately, these passes went out of play more often than they actually found Sandro or Ronaldo, so this tactic clearly did not work.

Although they had less than 35% of the ball, Porto aimed to keep it for as long as possible when they won it back, while also minimising the risk of being caught either in possession or on the counter. Here is what they did with the ball: 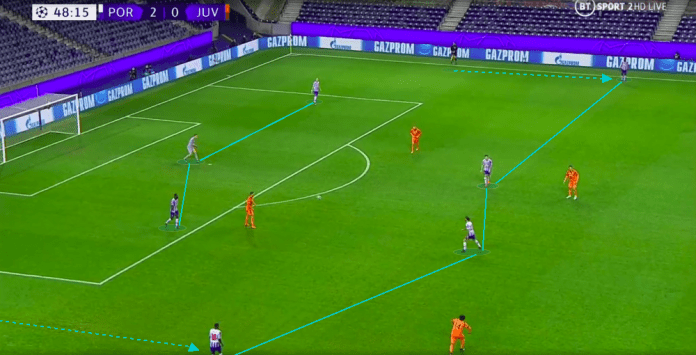 When they had the ball in their defensive third, Porto played around in a 3-4. The keeper’s footwork was used thoroughly, as the two centre-backs split to either side, while the full-back slightly pushed forward to get in line with the central midfield duo. 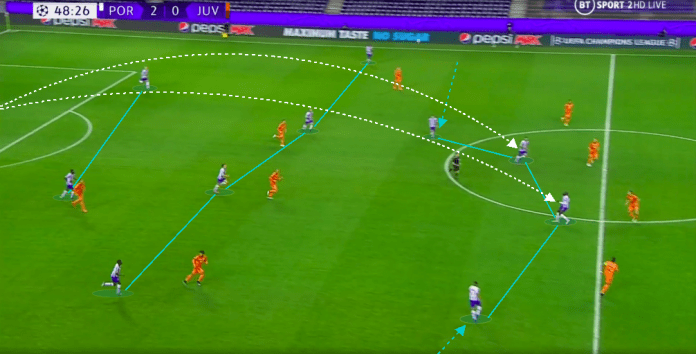 The hosts were not prepared to take any risks at all, so if there was any situation where no pass was on, they happily went long. This should explain why 75.61% of Marchesín’s passes were long balls.

In such cases, the two Porto forwards (Marega more often than Taremi) were usually the target men, with the two wide midfielders coming narrow on either side to be prepared to contest the second ball. So, Porto had a sort of a 2-4-4 in possession. 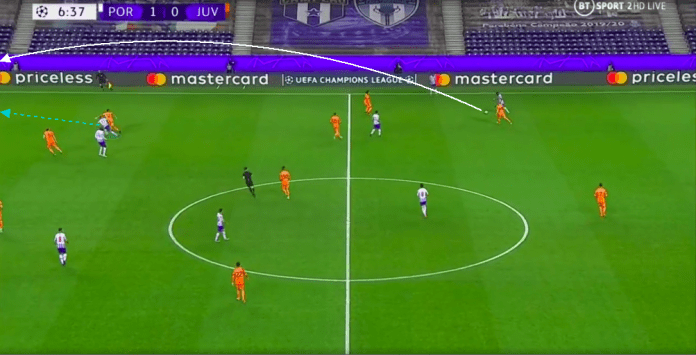 The hosts never tried to play through Juventus, so an alternative outlet was playing a long ball down the channel for the wide midfielder or striker to chase. They did this quite often on the right, where Corona worked tirelessly to chase such seemingly lost causes. 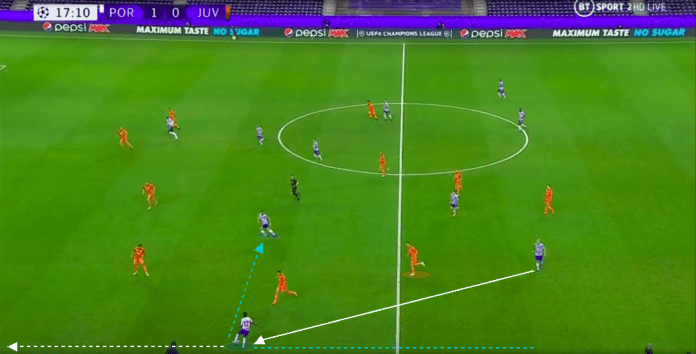 Porto’s final outlet was their left-back, Sanusi, who usually was not tracked too well by Chiesa. Therefore, he could be found advanced on the left, and then he would try to drive as far forward down the wing as he possibly could. His advances were facilitated by Otávio drifting inside, as we discussed previously.

Given that they were in the lead for most of the match, Porto’s simple objective was to keep the ball for as long as they could and not give it away cheaply, and it is fair to say that they achieved both objectives.

Sérgio Conceição and his men deserve a lot of credit for a brilliant performance against Juventus, as they laid and executed their gameplan perfectly.

Porto knew that they would have significantly less of the ball, so they did a great job in pressing and neutralising Juventus’ attacking threats with their compact 4-4-2.

However, the Italian giants certainly did not help themselves. They shipped two goals quickly after kick-off in either half as they did not switch on properly, while their one-dimensional attacks were completely useless against such a solid defence.

In the end, the one away goal they got might even be called a bit undeserved, but it counts and may go a long way to help them in the second leg.