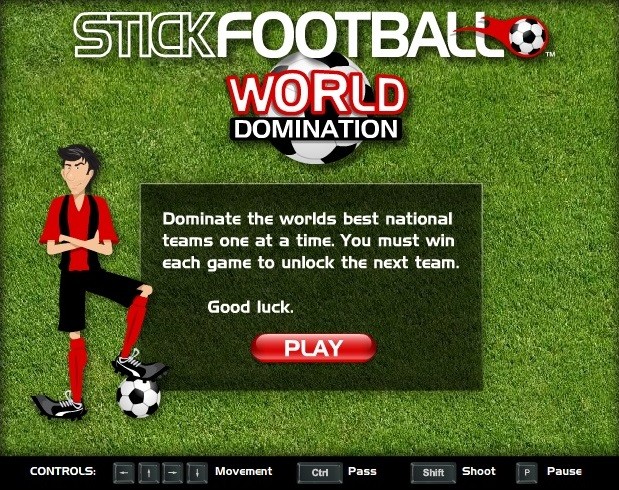 FIFA 2012, PES 2012, and Football Manager 2012 are all sure to keep football fanatics occupied for the next several months, much to the chagrin of wives, girlfriends, parents, employers, and teachers around the world.

However, if you’re looking for something much simpler but equally as fun and addicting, check out Stick Football, brought to you by Stick Sports (the company behind the cult classic Stick Cricket). The graphics won’t wow you like FIFA or PES will, and there’s not the overwhelming depth that you can find with FM, but it’s highly unlikely you’ll stop at one game.

What Is Stick Football?

Stick Football is a 2D, flash football game that brings back the nostalgia of simpler days, when the PS3 and Xbox 360 were only concepts and dreams.

Controls and gameplay appear to be simple enough on the surface, but if your fingers are faster than your brain, it could take quite some time to master Stick Football.

It also brings an element of realism, with tackles, fouls, cards, and set pieces. I’m still not certain whether or not there’s an offside rule, given how easy it can be to find holes in the defense, but as easy as it may be to find holes, it’s not nearly as easy to convert all of those potential chances into goals.

In the league modes, the object is not only to win, but to win as comprehensively as possible. The higher the margin of victory, the more points you can score for the team you’ve selected. At the end of each round of matches, the team with the most points in each match is the winner, and each match’s results is reflected in an updated table. And just like in the real Premier League, La Liga, and so on, at the end of the season, to the victor goes the spoils.

Along with the league options that are offered, there’s also the option to play friendlies with and against a number of international and club teams.

However, the most fun modes are the All-Star Strike and World Domination modes. In the All-Star Strike mode, you pick your desired club or international team to take on an All-Star team featuring the likes of Lev Yashin, Franz Beckenbauer, Bobby Charlton, George Best, Pele, and Diego Maradona. Meanwhile, in the World Domination mode, which is the deepest mode available, you take that same All-Star team and try to knock off 16 of the world’s top international teams. You start with Uruguay, and with each win, you unlock the next opponent, culminating in a final match against Brazil.

Simply put, it’s a lot of fun. As easy as it might look, it’s a great challenge, and it’s well worth your time to try out each league and each mode that Stick Football offers.

With a mix of arcade-style fun, realism, the past, and the present, there’s a lot to like about Stick Football, and there‘s a lot to keep your attention and to keep you coming back at least every week, if not every day. Just don’t try it at work, unless you’re the boss, that is.